I bumped into my next guest on Facebook as we prowl the backstreets of men's adventure fiction. G.C. Harmon's Steve Blazer series is one to watch. It's time we had hero cops in fiction again, if nothing else to balance out the negative press law enforcement seems to attract nowadays, albeit some of it deserved, but we all know there are more good cops than bad, and their experiences are ripe for adventure fiction.

G.C. has two books out so far, Red, White and Blue, and Loaded. The Blazer adventures take place in San Francisco, which, after the Dirty Harry movies, I'm convinced is the best setting for any police story. New York, Chicago, LA? Fuhgeddaboutit. 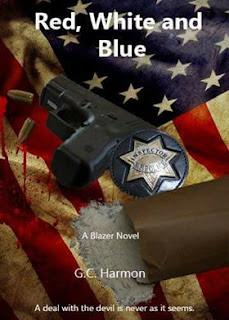 After crashing a thieves' den, arresting several suspects, and recovering untold lots of stolen merchandise, G.C. and I sat down to talk about how to write about it.

G.C. Harmon: I have been writing since about 1982, when I was 10 years old. Steve Blazer was one of the first characters I ever created. Even back then, I had an affinity for action heroes.

BD: Tell us about Steve Blazer. What makes him tick?

GCH: Steve Blazer is an honest and dedicated cop with a background in military special ops. In fact, this is where he met his mentor, Captain John Stanson. Because of his military background he is someone who is willing to do what it takes to get a job done. This has led much of the department to believe that, with an arrest record like his, and as many shootings as he's had, he's GOT to be doing something shady.

Steve is a deep believer in the war on drugs. Through much of his life, he's seen the damage that drugs do to people--not just the users, but everyone around them--and he has vowed to fight this any way he can.

In Red, White and Blue, Stanson is instrumental in seeing Blazer is given command of a special unit resurrected from the department's history. The unit has a shady past, and Stanson knows that the department is going to look at Blazer and his team with a lot of distrust. They both want to keep the unit above board and earn the department's trust. This is immediately put to the test when one of his men crosses lines and puts their future in jeopardy.

As a character, Blazer is also extremely cynical. He sees the worst of the worst, so he expects the worst in humanity. But it goes a little deeper. He sees where society is heading as a whole, and he sees himself as doing his part to try to save it, all the while knowing that the society probably can't be saved. But that battle must be fought. Steve puts his life on the line so good honest people can live good lives without fear. He feels like he has sacrificed his own chances at a normal life for others to have their chance.

BD: What inspired you to make Blazer a cop in San Francisco?

GCH: I've conceived many different versions of this character as we grew up together, but during the 1990s is when I settled on him being a cop. The more I wrote and developed the character, the more I wanted to try the cop thing myself. I graduated from the California Peace Officers Standards and Training Academy several years ago. I unfortunately never got the chance to work as a cop, but I've worked with police departments in my various jobs and I'm currently pursuing a degree in Criminal Justice. I've poured much of my training and many of my work experiences into my writing. As for San Francisco, I fell in love with the city as a kid, when I first went there with my dad. The view of the skyscrapers as we crossed the Bay Bridge was just awe-inspiring. It wasn't until much later that I saw the crazy politics of that city, but I actually like to incorporate that in my writing, at least to some extent.

BD: Do the Blazer books give us a glimpse into the real world of cops, are we getting a pulp extravaganza, or a little of both?

GCH: A lot of both. I love action, and I grew up on some of the popular pulp books of the '80s. I still read the Executioner series, the Destroyer, The Penetrator, Dennison's War, Nick Carter, some great and action-packed stories. I love crafting a long and complex action scene, and I've created some good ones in Red, White and Blue. At the same time, I strive for realism. I've taken many trips into the city (I live just a couple hours away) to do location research, and I have definitely put some of my own experiences into my stories. I try to avoid the cliches, the literary traps that are pure Hollywood. I want my stories to be exciting and inspiring, but also believable. My stories are definitely for action fans, but they will also appeal to anyone with a sense of justice. 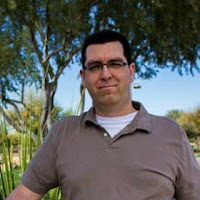 BD: Any plans for non-Blazer books?

GCH: Absolutely. I will concentrate on Blazer for the time being, the second book is being adjusted and will be re-released soon. I am also currently working on the third book, a prequel. I've got story ideas to keep Blazer going for quite a while. At the same time, I do have a few other main characters in mind that I'd like to try out. I have a spy character that I want to explore. I have ideas for a futuristic sci-fi-series. But for now, the first Blazer novel, Red, White and Blue, is available! Books 2 and 3 will be available soon. Enjoy! And make your life an adventure!
Posted by Brian Drake at 4:11 PM