I don't know about you, but I love westerns. They're the perfect storytelling vehicle. You can do a straight powder-burning story, throw in vampires, zombies, do a sci-fi twist, horror, mystery, romance, pretty much anything, and it will work.

There's something about the western in general, though, that always appeals to me. The open range. The loner on horseback. Untamed country. The possibilities. The danger. You don't find that in a lot of books. Maybe sci-fi, actually, but the wild west actually existed, and is part of the American mythology more than the questions of what lies beyond the stars.

Kurt Barker publishes a terrific series of "adult" westerns featuring hero Tom Blackshot. This is your typical powder-burning action western, but the writing is sharp, the action vivid, and Blackshot is a great throwback to the Golden Age of adult westerns like Longarm, The Trailsman, The Gunsmith, and recent series such as Stephen Mertz' BLAZE, to which I had the pleasure of contributing a book. The tradition lives, and is in good hands.

I bumped into Kurt at the livery stable and asked him a few questions over a bottle of rot gut:

Brian Drake: Who is Blackshot?

Kurt Barker: Tom Blackshot is a tough-as-nails gunslinger who will take on any job if the money is right, no matter how dangerous. He's part way between a law man and a bad man, but ultimately his heart is in the right place. 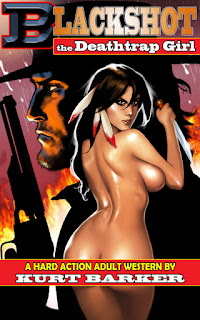 BD:  When did you start writing, and what inspired you to tackle an adult western?

KB: I had been writing as a hobby for a long time; most of my life, really. I never seriously thought about writing books because I always thought that the only way to get a book in print was to send manuscripts in to publishers, and I didn't believe I would stand a chance of getting through the bottleneck. When I found out about self-publishing and e-books, I decided to go for it and get some of my stuff out there. It's been a lot of fun and I've been very pleasantly surprised at the response I've received.

I got into adult westerns because I'm sort of an aficionado of book cover art, especially the great painted covers of the old pulp crime novels, “men's adventure” magazines and the like. When I first saw the cover art for series like Slocum and Longarm, with all the action, adventure and beautiful women, they really pulled me into that world.

BD: Were you a fan of the classic adult westerns like Longarm and The Gunsmith? How did they inspire Blackshot?

KB: I really like how fast-paced and action-filled those stories are; a lot of them would have made exciting movies. That style of storytelling appealed to me and made me want to create adventures like that of my own. Another big influence on my writing is Mickey Spillane. He was such a master at crafting hard-edged dialogue and characters, and the way he built suspense in the Mike Hammer stories was so impressive. Although I can't claim to be anywhere near his level, his writing did inspire Blackshot in a lot of ways.

BD: After a batch of short Blackshot stories, you finally tackled a novel. What made you decide to finally do a long-form story?

KB: I enjoy writing in the short story format, but when I started this latest story I knew that it was too big to tell in that way. I've always wanted to write a novel at some point, so I figured this was as good a time as any to take the plunge. It was a fun experience and has whet my appetite for more.

BD: What's next for Blackshot?

KB: Alas, poor Blackshot just can't stay away from trouble for long! There's plenty more coming his way, and I'm going to be writing more novel-length stories of his adventures. I still plan to sneak in some short stories too, when the right ideas come along. 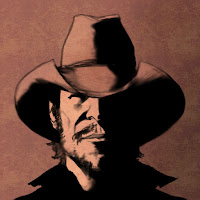 BD: Will there be any other non-Blackshot, or even traditional, westerns coming from the muzzle of your Peacemaker?

KB: Yes, I do have a lot of other stories that I'd like to tell, including some Blackshot spin-off concepts. I also think that the present day West is a great setting for western stories, and I'd like to explore that in the future. I still want to write more of Tom Blackshot's adventures first, but I'm plotting out these other ideas, too.

BD: You can check out Kurt's Blackshot stories by clicking here. Get ready for a wild ride!
Posted by Brian Drake at 12:28 PM