I have fallen way behind in my posting so here's to catching up . . .

The next Scott Stiletto book, The Glinkov Extraction, is available on Amazon.

This book is a bit different from the other two in that it's a bit darker, there's more intrigue, and I tried to mimic Eric Ambler's "slow burn" in the plot department, meaning the match lights on page one and the fuse burns all the way to the end before it's "fire in the hole" time. I may get some complaints about that lack of shoot-em-up action (really, there's less in this one) but the ending sets the stage for the next phase of Stiletto's adventures, and I quite like the "ripped from the (future) headlines" feel of the story. Yes, I'm playing Nostradamus with this one, but we'll see if I'm right. If not, this book won't age well.

An authorized mission to rescue a friend may be the last adventure of Stiletto’s career … or his life.

A coup stirring in Russia to overthrow President Putin faces the wrath of Moscow police and government agents who swoop in to round up or assassinate the suspects. Survivors run for their lives, including Vladimir Glinkov, Stiletto’s friend and ally from several dangerous missions. Glinkov desperately calls for help, but the U.S. government will not get involved. Despite his pleas to aid a friend in need, Stiletto is ordered to stand down.

Scott cannot do nothing while a friend suffers. He’ll get Glinkov and his family out of Russia before they’re executed or die trying. The C.I.A. responds with a bounty on Stiletto’s head, forcing him to deal not only with his own people but every two-bit thug trying to claim the reward as he sneaks into Moscow to search for his friend.

Other players who both help and hinder Stiletto’s cause raise the stakes as the scope of the conspiracy takes shape, and Stiletto is caught in events he’s not prepared for when he faces Russian police in a violent bloodbath from which there may be no escape. 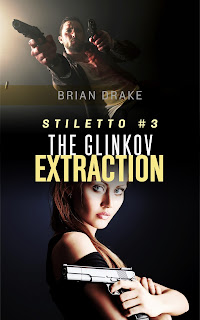 As for Stiletto #4 (as yet untitled), it's done, needs editing, etc., but the first three, while performing better than any of the other books I've released, really aren't doing much business. I've decided the first three need to earn at least $100 to pay for Stiletto #4's cover before I commit to releasing that book. I don't know if I just need more advertising (which costs $$$) or if the first book isn't grabbing people enough for them to continue. I wrote it like a men's adventure book of the '70s, and maybe it shows a little too much. A more contemporary crime series is in the works, but I may shop that to traditional publishers before I self-pub. It's looking more and more, thanks to my deal with Liberty Island for the Rogue Gentleman books, like I should pursue that avenue.

Anyway, if you're one of those following along, I hope you enjoy book three. It's .99 now and for a week after release, so jump. And thank you.
Posted by Brian Drake at 5:23 PM