I have been busy lately punching up an old manuscript called Bullet for One, a revenge tale featuring private eye John Coburn going after the killer of a friend. It's an unashamed I, the Jury riff and when you see it, you will know what I mean. The reason the edit has taken so long and has been so time consuming is that I wrote this book back in 1999, and I have learned a ton in the last ten years, so much so that what I am seeing in the script is nothing but overwritten whale vomit. But I think, deep down, underneath all those extra and unnecessary and redundant words (see what I mean?) is a really good story worth exposing.

Another problem I have discovered is the issue writing in the first-person has caused. The narrator is "I" this and "I" that and, boy, it sounds like he sure has narcissistic tendencies. It's all about him! There's too much "I" going on and my next edit will attempt to reshuffle lines so that "I did this, I did that, I did it again" doesn't happen so much. But it has made me wonder... if that how first person books are, just because? If so I have never noticed. I think this requires that I run through some of the more popular private eye books to compare. I will, possibly, learn one way or another, and I think that will be great (see what I mean?).

It has been fun looking at how the younger me, myself, and I used to write, and it's wonderful to see how much I, myself, and me have learned. Perhaps we and me are in the right place after all. Don't you think?
Posted by Brian Drake at 4:18 PM No comments:

Buy This Anthology or We Start Killing Puppies

Here is a project I am excited to tell you about, a new anthology featuring one of my stories, and the stories of many others who are up-and-coming writers to watch. Let me turn this over to editor Derek J. Canyon, himself a terrific storyteller, for the formal announcement:
I pleased to announce that the science fiction and fantasy short story anthology, Twelve Worlds, is now available for $2.99 on Amazon.com. Buy it here! 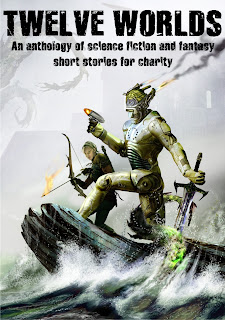 TwelveWorlds contains 14 short stories by new and aspiring authors.  Genres include my own gritty cyberpunk as well as epic fantasy, romantic fantasy, paranormal detective mystery, star-faring scifi, and more. There’s around 80,000 words total, so that’s a great deal for $2.99.

Author royalties for Twelve Worlds will be donated to Reading is Fundamental, the nation’s largest nonprofit children’s literacy charity.

My own contribution to the anthology is called The Price of Vengeance. It tells the story of Maggie, a woman with nothing to lose who goes after the genetically engineered dwarf who killed her entire gang. Yes, she’s hunting Noose, the protagonist of Dead Dwarves Don’t Dance. I think fans of Noose will really like this story, because it provides insight into and points of view of secondary and tertiary characters from my cyberpunk novel. If you want to read this short story, you’ll have to buy Twelve Worlds. It’s the only place you can get The Price of Vengeance!

Here’s a full list of the stories in this anthology:

By a Whisker by Kevin O. McLaughlin (3500 words): Someone is siphoning magical energy from the powerful ley nexus at Northshield University in this urban fantasy. Ryan goes to investigate, and gets help from an unexpected quarter.
The Accidental Muse by Amy Rose Davis (6200 words): A girl with no memory, a grieving widower, and a sweet-natured boy with strange power live a quiet life in their sheltered Keep until the night a traveling musician arrives at the door. The power of the musician's harp threatens to destroy their family unless one of them can stop it. A tale of gods, muses, mysterious spirits, and the power of love.

The Price of Vengeance by Derek J. Canyon (7400 words): In 22nd century Atlanta, Maggie hunts the genetically-engineered dwarf who killed her entire gang.
Insomnomancer by JE Medrick (3400 words): Witness life through the eyes of a predator. Kyle Hall, barely remarkable in a world of gray faces, is targeted by a very specialized hunter. To the target, it is night after sleepless night. To the Insomnomancer - a game of points and hungry satisfaction.

Thump by NB Kelly (4650 words): When a hitchhiker becomes part of an impromptu road trip, peace is the last thing that two young men will get out of it.
Iron in Shadow by Edward L. Cote (14900 words): The best thief in Rithmoor, the City of Dark Water, goes by the name Slip. He takes on a promising job, but it gets more complicated and dangerous the more he learns about what exactly it is he must do. To avoid certain death at the hands of the Great Magus Dibian, he must risk the wrath of the world's hardest people.

Together They Die by Brian Drake (3220 words): A former cop helps a ghost solve her murder.
Incubators by Manley Peterson (3200 words): Lost in space, three astronauts struggle to accept their fate aboard a crippled ship. Could a last-minute rescue be all they hoped for?

Cube by Coral Russell (4150 words): Luke's family isn't perfect, but they're worth saving. How far would you go to save your family?
The Star-Eater by K Gorman (6000 words): Karin wakes up one day on her starship, realizing her sister has been killed--but not before her sister cursed the murderer. Now she's got a man to kill. And her boss is starting to suspect that she's a little more than human...

Man-Maker by BC Woods (8050 words): A young boy in a society based entirely around defending itself against zombie-like demons refuses a sacred rite of passage.
Daddy Issues by John G. Hartness (4200 words): Vampires, voodoo, zombies and gold-diggers, it's all in a day's work for the boys at Black Knight Investigations. Vampire Private Investigators Jimmy Black and Greg Knightwood are called in to dispose of a zombie in the library, but there's always more than meets the eye where these detectives are concerned. Takes place before the events in Hard Day's Knight.

BONUS STORIES!
Weird and Wondeful by Tony Lavely (6000 words): Mailira and Marelsa together bring an old Scottish folk tale to life for a young musician.

The Light Stream by Jaylin Baer (3060 words): The transition between waking and sleeping, dreaded by some and enjoyed by others, becomes something altogether different for a very select few. Discover one woman's journey into the Light Stream.

So, if want to read new stories from 14 talented new authors, you should definitely buy this ebook! Who knows, you might find a new author that you really enjoy!

After reading it, don’t forget to write up a review on Amazon. It really helps sales.
http://www.amazon.com/gp/product/B004WT7OSQ/ref=as_li_qf_sp_asin_il_tl?ie=UTF8&tag=derjcan-20&linkCode=as2&camp=1789&creative=9325&creativeASIN=B004WT7OSQ
Posted by Brian Drake at 2:37 PM No comments:

Measure Me for a Halo; or, Every Man His Own Simon Templar

I have just finished reading The Saint and Mr. Teal, three chronicles in the life of Simon Templar written by the amazing Leslie Charteris. Once again Charteris amazes me with his use of the English language. I have never been so delightedly entertained by a writer’s work—the humor, the adventure, the biting satire of the political “mother hens” of the day (in fact, despite this book having been written in the ‘30s, you could easily apply Charteris’s comments to today—in the United States, at least—where they would fit our own “mother hens” perfectly, those dreadful fellows who seem to think that they know how to live our lives better than we do and spend their days trying to protect us from ourselves because they really do know best and if the unwashed and the Godly would just accept their counsel life would be so much better). Ahem. Charteris really does get one going…
To the book!  The three adventures featured in The Saint and Mr. Teal are rip-roaring yarns that make you laugh, smile, and, as I said, marvel at how Charteris uses words, like nobody has before or since (though, perhaps, P.G. Wodehouse could challenge the title—stiff upper lip, Jeeves!). I found myself unable to stop reading. In fact, I am glad that I have even more Saintly adventures to read as I recently discovered a gold mine of Charteris novels at a used bookshop in San Jose that I had never visited before. You can bet I will skip over whichever novel I had planned to read next and go straight to the next Saint book.
I do not possess the skill with language or satire that Charteris developed, though perhaps I could given enough time, but I will tell you that when I go back to my own manuscripts I bring a focus and discipline to the writing that seems stronger than before, because I now know how much better I can be.
The last time I wrote about Simon Templar, I was reading The Saint in New York, which has great sequences in it. I did not care for the book overall, because it had less comedy, and the action was more in line with what we American chaps tend to write. This is not to say it was bad, but I was expecting something different. The great revelation at the end, when the Major Villain comes to life, has been repeatedly used by writers of less skill than Charteris that I—and you—have read over the years, so when it finally happened  I was not surprised. And that disappointed me. Such is life.
And then there is the character of Simon Templar himself. With Templar, Charteris created a character you want to read about over and over again. He does not get boring. Templar’s moral code and dedication to his cause is so strong that you cannot turn away. You want to be there with him, taking on the ungodly in pursuit of boodle or pure justice. He is such a finely drawn character and you want him to be real. You want him to be out there somewhere with gal pal Patricia Holm and you hope that one day you cross paths and get to take part in an adventure, even if only for a moment, so you can relive your Saintly association during your golden years and know that there is a man out there who will not compromise himself. There is far too much compromise today. There are no more Alpha Males, or good ones, anyway, and Templar is a good one.
Oh, well. It is a silly day dream, really. But there are far worse ways to spend one’s time, and I do not apologize for saying so.
The next question is, which Saint book do I read next? Perhaps I will set the books out on the floor, close my eyes, and pick the first one my hand touches. Regardless of which one I pick, I know I will be entertained.
There is talk about a new television series or a movie featuring The Saint, but I do not hold out much hope. Roger Moore, when he played the character, played it well, but nobody can capture the True Saint (I will not mention the radio show, despite the great Vincent Price who played the role, as it too falls far short of the books). I wish the production well and maybe I will be surprised. I sure hope so. The world needs Simon Templar now more than ever.
Posted by Brian Drake at 9:57 AM 2 comments: