Nero Wolfe on the Air

I had my first exposure to Rex Stout's Nero Wolfe through the 1950s radio program starring Sydney Greenstreet as Wolfe and a bunch of actors as Archie Goodwin. Some don't like Greenstreet's portrayal; I do. The show had enough banter between Wolfe and his partner Archie, who does all the legwork because Wolfe won't leave the house, to make me want to read the books. I started with Wolfe #1, Fer-de-lance, and it's great fun.
But what I've enjoyed most is the Canadian Broadcasting Company's radio adaptation of Wolfe, reportedly based on Stout stories, but, even if they aren't based on Stout's work, they are spot-on and a joy to listen to.
There are 13 episodes, each about an hour long, and the adventures are not only well developed but you also get to enjoy appearances from Stout characters, like junior legman Saul Panzer, who didn't make it into the Greenstreet program.
I think my favorite of the CBC shows--"Before I Die"--concerns a mob boss hiring Wolfe, the gargantuan gourmet who weighs one-seventh of a ton, to fight off a blackmail scheme. Archie tries to convince the boss not to take the case, but the mob boss is in charge of the meat racket, and wartime food rationing is preventing Wolfe from enjoying beef and pork, so he helps the mobster in exchange for a supply of steaks and chops.
Each adventure is narrated, like the books, by Archie, and he's as much the star as Wolfe. Their opposing personalities bring a life to the series that isn't forced, unlike some we can think of. Each character has specific traits that make them come alive, and after spending enough time in their company you feel like you know them.
Mavor Moore played Wolfe; Don Francks played Archie; if you can find the shows, give 'em a listen. You'll enjoy the heck out of them.
Posted by Brian Drake at 9:07 AM 2 comments:

Set a Sales Record This Month...And It's Not Over Yet!

I hope you find some encouragement in this post, whether you are just starting out with an indie book or contemplating publishing one...

After ZERO sales over the final three months of 2010, and only so-so sales prior to that, I have set a personal record with my Kindle books, selling almost 40 when you combine my two titles.

This isn't an experiment anymore. Going the indie route is a viable way of making your work available to an audience providing the work is good and up to standard (as has been discussed many times and will not be repeated here).

So... If you haven't put up your book yet, get it on Kindle; if you're work has been available for awhile, promote some more or tweak it some more. I started my efforts in May 2010 and did OK; now, after some tweaking of my own (covers and descriptions) we're off to the races, and it only gets better from here. I have four more books scheduled for 2011, so expect fireworks.
Is it too soon to place an order for a red Corvette?
Posted by Brian Drake at 8:50 AM No comments:

You can look forward to a ton of great articles coming up on this blog. I'm setting up an interview with my pal Allan Guthrie, who has a new ebook out called Bye Bye Baby that is sure to please (it's a grabber and a shocker); I'm going to start commenting on some of my favorite "hard boiled" OTR shows beginning with the Canadian Broadcasting version of "Nero Wolfe" from the '80s; I have a few other good nuggets up my sleeve, so watch this space.
I also thought I would give you an update on my Kindle sales, as that is a constant topic of discussion on this world wide web of ours. For months now my books have been priced at $2.99 and have been doing okay. I've been happy with the results. However, between October and December of 2010, sales dropped to ZERO. What's an author to do? I redesigned the cover and revised the description of Justified Sins, the best seller of my two books, thinking that would help--it didn't--so I gave it away free on Smashwords, and TWO HUNDRED people took advantage of the free download. That was terrific. Two hundred people who might not otherwise give me a try decided to take the plunge. When that offer ended, I advertised on the Amazon forum that both Justified Sins and Reaper's Dozen were on sale for .99.
Sales have taken off, and my blog traffic is up too. Why folks are paying money for books that were offered for free less than two weeks ago I have no idea, but I'm not arguing about it, either. I wonder if the new cover and description of Justified Sins is now helping. And since I'm on the verge of releasing Show No Mercy, a spy thriller and a departure from the bleak hard-boiled crime novels I had previously been focused on (more on that later), this new attention will be very good for me indeed.
So, my indie author friends, it is possible to make a go of this without having any "name recognition". It's still early yet, but I think by the end of this year, when I'll have a total of six ebooks available, we'll be doing very well indeed.
It's an exciting time. Thanks for coming along for the ride!
Posted by Brian Drake at 9:44 PM No comments:

New Year's Preservations or, Rebecca Forster Is At It Again!

Editor's Note: I trust we are all recovered from the holiday juggernaut, and I may be late posting this, but my friend Rebecca Forster wrote a very nice New Year's Day blog and I wanted to share it with you. You can read more of Rebecca's scribblings at www.rebeccaforster.com.
NEW YEAR'S PRESERVATIONS, NOT RESOLUTIONS
After the toasts, kisses and well wishes come the New Year resolutions.

My resolutions usually revolve around weight loss, growing five inches and becoming a blond. The first would be easy if I had an attention span that lasted 12 months rather than twelve minutes. The latter two have been on my list since I was five years old. I will never be taller than I am and the one time I tried to go blond I ended up looking like Jane Fonda in Klute (Google both to satisfy your curiosity).

So, that brings me to today – January 1, 2011. I have resolved to make no more resolutions. Instead, I am embracing New Years Preservation. I have identified the good things I had in 2010 that I want to keep in 2011.

1) My husband and kids. I like them. We think each other are terribly funny. Good laughs and great conversation make any day of the year better.

2) My friends and other family members for the same reason as my husband and kids.

3) My car. It’s like a little black dress – nothing fancy, fits me well and I can take it anywhere without embarrassing myself. It is ten years old (the same age as my LBD). I think it has another ten years to go.

4) My writing jacket. It is an ugly, screaming yellow, fleece jacket that I bought for $10 five years ago. That jacket is the signal that I am working. My husband forbids me to wear it outside. I love that jacket. I want to be buried in that jacket.

5) My father’s fountain pen. He passed away six years ago. My mother gave me his pen. It looks like a skinny watermelon and doesn’t hold much ink. It’s about 60 years old. Great pen.

6) Dinner parties. Cooking and conversation are great together especially when you mix up the guest list. Definitely, I’m preserving the tradition. Your invitation is in the mail.

7) My sewing machine. It’s on its last legs. The buttonholer doesn’t work anymore but it sews backward and forward. We’ve been friends a long time and you don’t throw a friend away just because they can’t do the fancy stitches anymore.

8) My work schedule. I work a lot. I work 7 days a week. Sometimes I don’t have much to show for all those hours but sometimes I end up writing a pretty good book. Working hard, doing my best, that's what every year should be about.

9) Debbie, who has been cutting my hair for a year. It took me a long time to find her. I still like her. (Debbie at Trax Hair design in Torrance if anyone needs a good haircut.)

There should be a number ten but there isn’t. If the car still works, Debbie doesn’t have a meltdown and my family and friends are hanging in there with me by the time 2012 rolls around, I will be a happy clam. I’ll still have brown hair and stand 5’4”. I probably won’t be whippet thin but what the heck. Since I won’t be losing any weight, I won’t have to sew any new clothes nor will I have to worry about my roots showing.

Make resolutions and failure is waiting around the corner. Who needs it? Just gather up, gobble up, stash away all the good stuff you’ve already got and 2011 is going to be happy, successful, fabulous year.

I wanted to jump on very quickly to say thank you for the tremendous response to my giveaway of Justified Sins... yes, I know it's free, so, duh, a ton of people are going to show up, but, seriously, it's nice to see, and some folks have even ponied up money to buy a copy. I guess they liked what they saw. Anyway, it dawned on me that a lot of you do not have a Kindle or another e-reader, so I wanted to extend the offer to you in another way.
If you want to read the book, send me an email at briandrake88@yahoo.com and I will send you the book as a .pdf. You can read a few pages and use the rest to roll your cigarettes or whatever comes to mind.
This offer, like the Smashwords giveaway, is good until January 14.
Posted by Brian Drake at 11:08 PM 2 comments:

We're getting ready to kick off SHOW NO MERCY here at the writing ranch and to get things going I'm going to let you have my previous novel, JUSTIFIED SINS, free of charge. This offer is good until January 14th and you have to visit my page at Smashwords.Com and enter this code: TR66G.
Here is the link to my Smashwords site: http://www.smashwords.com/books/view/21475
In return, if you could leave a review on Amazon that would be great.
The book has a new cover to match the layout of SHOW NO MERCY, by the way, which is ten times better than the previous drawing I had used.
Have fun with it.
And check out SHOW NO MERCY when it's released later this month. I'm going to do some excerpts here on the blog so you can have a taste...
Posted by Brian Drake at 12:11 PM No comments:

Show No Mercy: The Cover 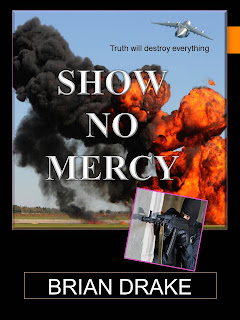 Here's a peek at the cover for my next ebook. I thought y'all would like to see it. I'm still waiting for my editor to return my manuscript--the longer he has it, the more I think he's really marking it up. Is that a good thing? Anyway when it comes back I'll make whatever adjustments are necessary and then we'll be ready to go!
Posted by Brian Drake at 9:22 AM 2 comments: