J.P. Medved Brings Back the Techno Thriller with JUSTICE INC.

My next guest is J.P. Medved, who is carving a niche for himself in the thriller and science fiction arenas, and bringing the "techno" back to the thriller as well.

His latest, from Liberty Island Publishing (full disclosure: L.I. is publishing my Steve Dane novels), is called Justice Inc., and you're in for a wild ride.

We hear a lot about private military contractors since the "War on Terror" began, where a DuckDuckGo search brings up a lot of articles on the pros and cons of using such organizations.

But J.P. has made the PMC a new kind of hero, detailing all the gizmos, gadgets, and other devices actually in use today as they lay waste to the bad guys, so I had to have him over for a conversation. 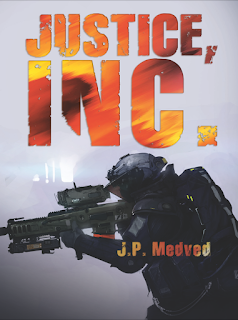 JM: I've been writing since I can remember. In grade school a friend and I wrote a "screenplay" for a spy comedy, in middle school I wrote short funny stories in the margins of my notes during class, in high school I wrote a (terrible) few chapters of a military thriller about a future war with Russia, and in college I wrote a mix of steampunk and political, Ayn Rand-inspired short stories. I've got notebooks and Microsoft Word files going back some 20 years now with stories and other fiction projects. It's something I always come back to, and that really, in retrospect, feels like a compulsion. I don't think I could stop writing if I wanted to.

BD: I see quite an eclectic mix of titles on Amazon, sci-fi to thriller and a few in between. What is it like to genre hop? Do you ever get your sci-fi tropes mixed up with your thriller tropes, or do you find elements that are universal between the two?

JM: There's definitely a different mental state required to write a light, fun steampunk adventure compared to a gritty political thriller. Both scratch different itches for me as a writer which is why, despite the difficulty (especially in marketing), I continue writing in multiple genres. My experience has been it's actually not that hard to keep the two separate in my mind when writing, trope-wise. There's obviously differences; characters and reactions may be a bit "larger-than-life" in sci-fi compared to a more grounded, "realistic" treatment in thrillers, but the basics--arc, stakes, plot structure--are the same because those are universal to all stories. At least that's what I've found.

BD: Tell us about Justice Inc. What inspired the assembly of Eric Ikenna and his team?

JM: "Justice, Inc." was actually inspired by a documentary I watched about a South African private military company called Executive Outcomes.  In the late 90s EO was able to completely halt a brutal civil war in Sierra Leone and push back the mass murdering rebel forces of the "Revolutionary United Front" with only about 100-150 soldiers. My boss at the time and I started talking about it, and he posed the question of why an organization like that couldn't be incentivized to deal with some of the really bad, tyrannical, governments and dictatorships still operating in the third world. So I took that seed of an idea and did a ton of research into the economics and politics to see how something like that might work--I looked into operating revenues of existing PMCs, read Erik Prince's book "Civilian Warriors" about Blackwater, dug up a bunch of scholarly papers on private military contractors and the like. It seemed not only plausible, but interesting enough to build a story around, so I did.

BD: You have a lot of techno detail in Justice Inc. Fan of Tom Clancy growing up? How much is real and how much is from your imagination?

JM: Definitely a Clancy fan growing up; "Rainbow Six" and "Red Storm Rising" are still some of my favorite books. The tech in "Justice, Inc." is all based on things that already exist in some form, or have been suggested and are actively being researched as extensions of current technology. For example the stealth suits are based on some very real research into light bending meta-materials that has been advancing significantly over the last decade or more. The ubiquity of cryptocurrency, 3-D pharma printers, drones, and self-driving cars are all simply extensions and predictions of technologies we already have being refined and adopted en masse over the next few years. 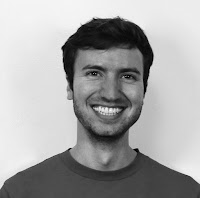 BD: You already have a free Justice Inc story available on Amazon (it's called The Contractors); any further novels in the series planned?

JM: Yes! The 2nd book in the series is already outlined and I plan on getting started on writing it within the next month. With JI2 I'm really wanting to explore the question of how a functioning libertarian society could arise, semi-organically, and the major challenges (internal and external) it would face in a world of state-sponsored terrorism and fanatic religious extremism.

JM: I'll definitely add a plug that, if you like "Justice, Inc." and similar stories, you should check out Liberty Island, which is the publisher and has a ton of other great, pro-freedom works. Additionally, the Libertarian Fiction Authors Association is a great source for additional pro-liberty novels and, for other writers, a collegial bunch of folks excited to help each other with craft and marketing.
Posted by Brian Drake at 4:47 PM No comments: