One Night in the City

It was supposed to be a quiet evening of dinner and dancing as my friend Corinne celebrated her 33rd birthday.

We met at a nice Mexican place off the Embarcadero where I paid too much for a vodka martini that wasn't even filled to the top, the cheap bastards, and paid way too much for a platter of beef tacos. These were mini tacos, the kind you might get off a corner roach coach, and $12.50 to boot. What arrived on my plate, looking like something you might find in the gutter, I would have paid $2 for at one of those street-corner establishments, and I would have enjoyed it more too.

One of Corinne's coworkers was supposed to be there and she is an attractive lass with whom I wanted to get more acquainted, but she didn't show. However, Corinne's roommate did attend. Her name was Renee and she was very nice and we had a lovely chat. Things were going so well that I decided I wanted to get her phone number and continue our conversation at a later time.

Renee had a "friend" with her. They had similar hair cuts, which should have been a clue. Straight black hair down to the shoulders with thick bangs across the forehead. Like a helmet. I should have known....

So the night ends and I decide to walk the girls to the MUNI station where they can catch their train back home; as I'm preparing to ask Renee for her home telephone number, she says, "Wow, I'm cold," and snakes her arm through that of her friend and pulls her close. They walked that way all the way to the station.

Call this "The Night I Almost Hit On a Lesbian"

Not that, you know, there's anything wrong with that.
Posted by Brian Drake at 1:07 PM 1 comment:

I apologize for the lack of updates in recent weeks. Real life has been crazy! But out of the craziness has come a couple of stories that are doozies indeed and I will post them soon. One of the anecdotes involves me and a partner starting a new radio talk show, so very soon you may not only be able to READ Brian Drake but LISTEN to him as well!

Anyway, we are gathered here today to announce the release of the second episode in the Rogue Gentleman series, Moving Target, which picks up a day or two after Private Vendetta ended. Thanks for looking! 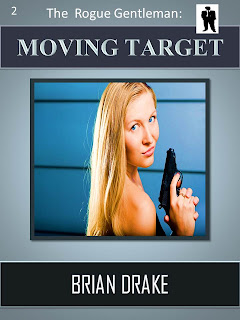