Stiletto #2: The Fairmont Maneuver is now available for $2.99 so grab it! 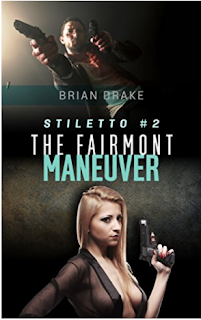 An SOS brings C.I.A. agent Scott Stiletto to San Francisco. Ali Lewis was once a capable agent herself, before she left the covert world and took over her mother’s clothing company. When her father is murdered by a former business partner who wants the business, Stiletto is the one man Ali can trust to learn the truth behind the killing.

Legally, Stiletto’s hands are tied. There is only so much he can do to stir the pot of police corruption he soon discovers, led by a young inspector who has no interest in solving the crime. When evidence points to a growing international conspiracy orchestrated by Iran involving the smuggling of nuclear bomb parts, kidnapped scientists, and a decades-old mafia / Silicon Valley alliance the government has been powerless to stop, Stiletto has no choice but to break the rules and show this domestic enemy what .45-caliber justice looks like.

Get ready for a non-stop thrill ride … you’ve never read action like this before!
Posted by Brian Drake at 3:28 PM No comments: