It's my pleasure to bring back Andrew Warren, who has been doing a bang-up job of bringing the action and thrills with his Thomas Caine books, the latest of which, RED PHOENIX, is out today. I invited him back for a follow-up after our last chat.


Brian Drake: Tell us about the new Thomas Caine adventure.

Andrew Warren: Thanks for having me back Brian!  In Red Phoenix, we learn a little bit more about Thomas Caine’s enigmatic past, and the mission that got his partner killed.  Flash forward a few years, and Tom is still on the hunt for the corrupt CIA Director who betrayed him.  When he finally catches up to his prey, he discovers that his partner’s son, now a young man named Sean, is being held in China on espionage charges.

Caine must make a choice:  Does he pursue the man who betrayed him, and finally take his revenge?  Or will he abandon his hunt, and travel to Beijing to save Sean from a deadly web of conspiracies and killers?  He is forced to confront the anger and rage that drives him, and begins to questions himself, and his motives.  He has the opportunity to kill the man who ruined his life, but at what cost?

Along the way, Caine must also deal with a double agent in the Chinese Ministry of State Security, who has their own reasons for wanting Sean dead, as well as a triad gangster with some deep-seated rage and anger issues of his own! 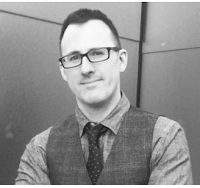 It’s a stand-alone spy thriller, and it definitely tells its own complete story.  But if you’ve read Devil’s Due and Tokyo Black, there are plenty of callbacks, character developments, and Easter eggs that will bring a smile to your face.

BD: After three books under your belt, what have you learned about yourself as a writer?

AW: Honestly, I still have a hard time thinking of myself as an author.  The first two books have done well, but sometimes I have a hard time trusting my instincts and abilities.  There was one scene in the new book, I won’t say which one… I don’t know why, but for some reason, I was convinced that there was no way I could pull it off, and do the scene justice.  I was terrified to write this scene!  I kept putting it off, and putting it off, and it ended up being the very last thing I wrote in the first draft.  And now, it’s actually one of my favorite scenes in the book!  So I think I’m still learning to trust myself, and just dive in and give things a shot – if they don’t work out, I know I can always change it later.

AW: Man, I have to say, I love my readers.  They are awesome.  Their reaction has been so positive and supportive; it’s surpassed my wildest dreams.  After Tokyo Black launched, one reader emailed me and said that she was a world traveler, but had never been to Japan.  After she finished my book, she began planning a trip to Tokyo.  That meant so much to me. As I mentioned in my last interview, after I visited Japan, I felt a special connection to the place.  It was so important to me to convey that excitement and fascination I felt to my readers.  When I got that email, I knew that at least for that one person, I had succeeded.

I was also contacted by fifteen-year old girl in India who loved Devil’s Due!  She said she admired Naiyana, the female lead, because she was strong, brave, and she did not abandon Caine in his time of need.  Of course I was incredibly proud and touched, but I was also a bit concerned.  I certainly did not intend for that character to be a role model for teenage girls!  But I remember being that age, and getting pleasantly lost in books that I loved.  The idea that I could have that kind of affect on someone so different from me, so far away… it’s incredible, isn’t it?

I’ve had a few advance reviews come in for Red Phoenix recently, and for the most part, they’ve been incredibly positive as well.  I am very grateful, and lucky, to have such a good connection with my readers.  Hearing from them always makes my day!

BD: Are you able to find a balance between writing and marketing?  If so, how?  If not, how are you trying to do that?

AW: Marketing seems to be an area that many authors struggle with, and I am certainly no exception.  I’ve run some Facebook ads, and I run a promo from time to time, but I could definitely focus on this more.

A lot of my readers have found me through groups on Goodreads, and I am making an effort to be more involved there, and not just to promote my own books.  Some of my most rewarding experiences in self-publishing have come from talking with other authors like yourself, sharing tips and ideas, and helping each other out.  A rising tide lifts all ships, as they say!

But overall, I do believe that the single most important thing I can do is to write more books for readers to enjoy.  So while I do plan to increase my marketing efforts, I still want to focus most of my energy into creating more exciting stories.

BD: Have you started pricing Ferraris?  If so, are you going hybrid or traditional?

AW: I’d rather price the black GTR from Tokyo Black!  But seriously, I’m a long way from that.  I look at being a self-published author as running a small business.  The first year was just seeing if things could be profitable, and they were.  Now, it’s time to see if I can scale, and grow.  Write more books, explore some more genres… but for now I’m not even pricing Toyota Corollas!

I have nothing against working with a major publisher, but I see no reason not to go hybrid, and keep self-publishing things on my own as well.  Why give up ownership of something I created if I don’t have to?  Even if someone swooped in and handed me a mountain of cash for the rights to one character or series, why not create something new on my own?

Self-publishing is an incredible opportunity for authors.  The technology we have at our disposal is mind blowing when you compare it to the traditional publishing business.  We can press a button and reach hundreds of thousands of readers instantly.  Why would we ever give that up?

BD: Will we get more Caine adventures in the future, or are you looking to try another character or even another genre next?

AW: The short answer is “Yes!”  It’s funny – the whole time I was writing Red Phoenix, I kept telling myself, “I can’t wait to finish this book so I can try something different, something like sci-fi or fantasy.”  But then, as soon as I finished, I began getting more ideas for new Caine books.

Either way, Thomas Caine will return… it says so right at the end of the book!  But I would also like to try my hand at some other genres as well.  I’ve had some ideas bubbling for a sci-fi space opera series.  But as long as Caine keeps whispering in my ear, I’m happy to keep having adventures with him across the world.

Thanks again for having me on your site Brian!  I really appreciate it, and I hope your readers enjoy hearing about the Thomas Caine series. 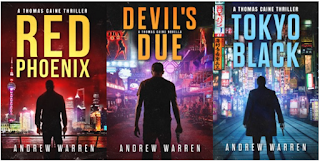 Red Phoenix launches on Amazon Feb 7th.  You can also check out Devil’s Due, and Tokyo Black, out now!  If you want to know more about my books and what I’m working on, you can visit my website at www.andrewwarrenbooks.com.  You can also drop me a line on Facebook: @andrewarrenbooks, or Twitter: @aawarren71.

And if anyone has any questions about Thomas Caine, self-publishing, or writing in general, please don’t hesitate to contact me… I’ll do my best to answer!
Posted by Brian Drake at 8:44 AM No comments:

We're about a month away from the official launch of my new Stiletto series and I wanted to give you a sneak-peak.

Basically what I'd like to do is build a "street team" of readers who can leave some Amazon reviews on launch day or a few days after, or, worse case, tell this emperor that he has no clothes before he makes a fool of himself. I'm thinking the second week of March would be a good time to release the book unless you tell me it would be better to delete the damn thing.

I've set up a download page at Book Funnel for free downloads of Stiletto #1: The Termination Protocol. If you'd like to read it, please email me at briandrake88 at yahoo dot com and I'll provide you with a link.

Those of you who read an earlier version of this book in 2014 will for sure want the free download because I don't want you to buy it twice. There have been extensive revisions to make this the start of a series, so it's not entirely the same book. 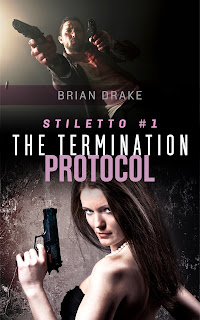 A deadly nerve agent . . . one man standing between peace and Armageddon . . .
CIA agent Scott Stiletto is one of the best. When a derivative of sarin gas thought destroyed shows up on the open market, Scott races to keep the chemical weapon out of enemy hands. The Agency's only lead is a terrorist named Liam Miller, and Stiletto plans a simple snatch-and-grab that quickly lands Miller in U.S. custody. The rendition soon turns into disaster.
Another terrorist group snatches Miller in a blinding fast raid that leaves four agents dead and Stiletto wounded. Worse, the new players—calling themselves the New World Revolutionary Front—are the ones planning to buy the sarin. They use Miller to plant a false trail for the CIA to follow while their deadly plan comes to fruition.
The NWRF doesn't count on Miller having a few tricks up his sleeve, or Stiletto's relentless determination to complete his mission. And once Miller gets away and the two team-up to fight their common enemy, the NWRF faces the wrath of two men who are deadlier together than they are separately.
Posted by Brian Drake at 5:07 PM No comments: