My buddy Matt Hilton has a new book out. Worst Fear continues the adventures of private detective Tess Grey and Nicolas ‘Po’ Villere, and I invited him to tell us about it. Matt has previously written the twelve novels in the Joe Hunter series, and they are top-notch action entertainment that deserve a wider audience, but more on that in a minute. Here's Matt about the new book:

Brian Drake: Tell us about your latest thriller.
Matt Hilton: Worst Fear is the fourth in a series of crime thrillers featuring Tess Grey and Nicolas ‘Po’ Villere set in Maine in the USA. Tess is an ex-sheriff’s deputy who was injured in the line of service and now works as a private investigator, whereas Po is an ex-con, who spent time in Angola, one of the toughest prisons in the US. Chelsea Grace is discovered dead at the foot of a cliff, and the police write off her death as a suicide, but Tess thinks otherwise. Chelsea was terrified of heights, so jumping to her death was the last way she’d have chosen to die. As Tess starts looking into her death she discovers that others from a small group of her college friends are also being hurt or killed, and Tess herself could be on the list. It’s down to Tess and Po – ably assisted by their larger than life friend, Pinky Leclerc - to stop the killers before it is too late.
BD: How are Tess and Po different from Joe Hunter?
MH: Joe Hunter is ex-Special Forces, a tough guy with a heart, who isn’t afraid to use his impressive skill set to deal with the bad guys. He’s seen as a vigilante by the police, and quite possibly a terrifying force of nature by those he fights against. On the other hand Tess has none of Hunter’s skills, and is an ex-sheriff’s deputy, so tries to do things by the book. Po is possibly nearer to Hunter’s character, though he’s a guy who learned his skills while surviving in prison, so has a different approach to dealing with problems. Hunter’s adventures are slam-bang actioners, whereas the Tess and Po books are more mystery and suspense – with hefty dollops of action.
BD: Why the departure from Hunter?
MH: Like most authors do, I wanted to spread my wings and do something different. I also love writing in the horror genre, but my publishers weren’t interested. I was pigeonholed as the “Joe Hunter guy”. So I had to propose a new series similar but different to Hunter without straying too far afield. I have always been fascinated with Louisiana as a location, and also Maine, so decided to write a mystery set across both States. That book became Blood Tracks, the first in the Tess and Po series. I don’t see it as a departure as such from Hunter, as I’m pretty certain that the characters all exist in the same fictional world, and one day I’d love to write a cross-over novel with them all in it.
BD: Was using a female protagonist your decision or your publisher's?
MH: It was mine. The Hunter books are by virtue of their subject matter sometimes seen as “men’s books”. They can be macho and aggressive, and in the past some critics thought some of my female characters were only there as dressing. I decided to write a female lead for a few reasons, the first being to see if I could do it, the second because it might attract more readers, and third to shut up my critics! Seriously though, I felt that Tess was a worthy character, and I’ve enjoyed writing her story as much as I have any of my male characters. One thing I was certain of was that I didn’t want to write a female Joe Hunter in tights/panty hose, but a rounded, strong and determined woman in her own right. I brought in Po, and his pal Pinky, to do the kind of stuff that Tess, being a PI and also ex-cop, couldn’t/wouldn’t do, to also satisfy the readers looking for similar action they were used to from my books.
BD: What are you working on next?
MH: Anyone who has followed my books to date might be surprised. I’m known for being a Brit writing American thrillers, but the book I’m currently working on is a police procedural set in the UK, with a rather large genre twist. It could also be a psychological thriller, or a supernatural novel, depending on the perceptions of individual readers. I genuinely hope that it finds a publisher and that readers enjoy the book. After that I’ll be getting down to writing the thirteenth book in the Joe Hunter series. And Tess and Po will be back.

So back to what I was saying about Matt deserving a wider audience. He doesn't have wide distribution in the United States, although some of the Hunter books have been published here via Down & Out Books. If you're in the U.S., the best way to get Matt's books is the UK's Book Depository. Free shipping, no tax, quick service. I use them often.
Posted by Brian Drake at 2:30 PM 4 comments:

A couple of Brit authors have been on my radar recently--Chris Ryan and Duncan Falconer--and I'm finally getting around to reading one of them. In this case, Ryan and his book Strike Back. I'm familiar with the title from the Cinemax/Sky1 TV series, so I thought it would be best to start there. (As an aside, I haven't watched the TV version, so I have no expectations.) 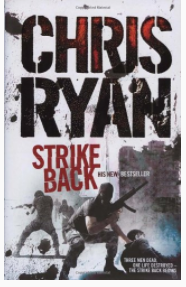 And, wow, what a book. I'm only 45 pages in, having just read the prologue after receiving the novel from Book Depository in the UK (only took a week to get to me in the U.S.). Great prices and free shipping on that site, so make it one of your stops when you're looking for something new to read.

Anyway it's a whopper. Great bloody action (emphasis on bloody) and he really draws you into the story. In the opening battle in a building in Beirut, you feel like you're there with the SAS guys as they go blasting terrorists to free a hostage.

I don't often mention books until after I've finished them, but I'm so impressed with this title I had to stop and post. I'm really looking forward to this one and how it plays out. Ryan is a terrific writer, no fluff, very tight and to the point. And he knows of what he writes, having been an SAS man himself.

Check it out.
Posted by Brian Drake at 9:21 PM No comments:

....I was born in Minnesota, reportedly in the same hospital as F. Scott Fitzgerald, but nobody has ever bothered to check, let alone me because who has time, and, besides, it's better just to assume. What makes this year significant is that, unlike every other birthday where I evaluate where I am in life and bemoan my lack of progress in certain things in general and everything in particular, I'm actually finally on the road to something.

1) Engaged to a great gal who's like Nina Talikova in the Steve Dane books. Wedding is this time next year.

2) Five-book deal with Liberty Island Media, the aforementioned Dane books, with the first release due early next year.

3) I have another manuscript under consideration with a major publisher and we'll know the fate of that deal very soon; if it goes south, we have another buyer lined up.

So, yeah, it's a happy birthday.

Whatever you're working toward, don't quit. It might take 25 years but you'll get there. For that #3, I've been sending that particular publisher material since I was 16 years old.
Posted by Brian Drake at 5:41 PM 6 comments: