I haven't mentioned this before because I wanted to make sure the book was actually accepted and printed, etc., but James Reasoner was kind enough to let me write an episode of the Blaze! Adult Western series that his Rough Edges publishing company releases on a more than regular basis.

J.D. and Kate Blaze are married gunfighters who roam the west getting into all kinds of trouble--usually for a fee. The series and characters were so similar to those in my Steve Dane series that I decided to ask for an audition. James and series creator Stephen Mertz helped work the kinks out of my original outline (I submitted something that would have gone 300 pages; they said I needed less than half of that). I proceeded with the project and now we have Blaze! #16: Copper Mountain Kill, which you can order on Amazon 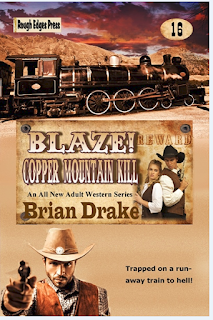 "The Copper Kings of Montana are at war—and Kate and J.D. Blaze are caught in the middle! Hired to get to the bottom of the sabotage and murder plaguing the mines, the Old West's only team of husband-and-wife gunfighters tackle crooked lawmen and a band of vicious outlaws known as the Lion Gang, only to find themselves trapped on a runaway train loaded with dynamite, a bomb on wheels that threatens to blow the Blazes sky-high!

Acclaimed thriller author Brian Drake (THE TERMINATION PROTOCOL) joins the Blaze! team with a novel packed with excitement and mile-a-minute action. COPPER MOUNTAIN KILL is Western adventure at its finest."

I set the novel in Butte, Montana, where my family is from, because there's western novel gold in that Big Sky Country, and I wanted to explore the possibilities of exploiting the location. I spent a lot of time there growing up, so the research was easy. The Copper Kings were in fierce competition for the copper in Butte's mountains and hills, and there was action aplenty (ask Dashiell Hammett) in the old days. It was the perfect setting for a powder-burning western.

Someday I'll write an essay on the long-term effects of that mining. Let's just say they raped the land and the mine is now an EPA Superfund site yet the government is either unable or unwilling to clean it up and instead just manages the damage. I'm torn being being angry about the environmental damage and grateful that the mine provided a livelihood for three generations of my family.

If you're into westerns, you'll like the Blaze! series. J.D. and Kate were great characters to work with, and I hope I get a chance to send them on another adventure.

Hi, everybody. I've just signed up with Instafreebie to help build my street team and I hope you'll join me. You get a free download of Stiletto #1: The Termination Protocol in exchange for signing up. If you don't want to sign up yourself, maybe you know a voracious thriller reader who might, so please feel free to share this link far and wide.

A lot has been happening on the book front, both with my self-published work and the traditional contract I just signed, so I'll have more updates soon.

Thank you in advance!
Posted by Brian Drake at 9:36 AM No comments: