We've tidied up the blog a little as far as the sidebars go where I normally post my available titles. Steve Dane is there; three books out from Liberty Island, with two more forthcoming, hopefully this summer.

If you can remember what was there before, and isn't there now, you might have an idea of my upcoming announcement.

We have a new kid on the block who is worth checking out. Kronos Ananthsimha has written a terrific action yarn called Alaskan Storm, and it hits all the right buttons, starting from page one.

Let me quote one of the Amazon reviews to give you a taste of the story: "The premise is unique and original, centering around a secretive DARPA special ops unit called the Hounds, comprised of an eclectic cast of characters (and a St. Bernard) and tasked with countering scientific threats."

What you get with Alaskan Storm is a bit more than the usual action thriller, and it's a treat in this age of bearded anti-terrorist dude bros tactically dude bro-ing as they fight the same bad guys everybody else is writing about.

Kronos hails from Bangalore, India, and I think you'll be very interested in seeing what he has up his sleeve now and in the future. I won't try and tell you about the book because Kronos is better at it than I am, so here it is in his own words..... 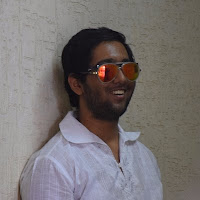 K: I started writing when I was 16 years old, around five years ago. For a few years, I just tried to write and I’m still learning. After publishing a short story anthology with a small press which went badly, I started learning to write. I read books on the writing craft, read online articles and watched a wide array of videos from professionals in the field. Each time that I write is an experiment with my mind’s wildness. I’ve been keen on making a career in writing since I started reading books in Primary school.

BD: What is it about adventure fiction that particularly inspires you?

K: The three books which redefined my view on storytelling are Matthew Reilly’s Temple, Clive Cussler’s Inca Gold, and James Rollins’ Bloodline. I discovered them accidentally and they expanded my perception of the sheer fun, excitement, craziness and the learning ability one can have with books. As I read more books in this action-adventure genre, I wanted to create my own epic roller coaster ride that would be brutal, detailed, fun and informative. This came into reality in the trilogy of novellas called Blood Stone Impact, the first of which is Alaskan Storm. I’ll compile the trilogy into one book when I’m done writing them and put it out in the print format.

BD: Which authors have influenced you most?

K: My earliest taste of thrillers was through Robert Ludlum’s classic masterpieces of complex plots with brilliant protagonists who had deep characterization.  Vince Flynn, Brad Thor, Brad Taylor, Ben Coes, and Mark Greaney are some of the legends of modern spy-action thrillers who’ve shown me the impact that this genre has on the world. Two new authors, Andrew Warren, and Aiden L. Bailey write uniquely brilliant books which have got me hooked recently. I’m lucky and fortunate enough to have them as my mentors, friends, and guides for every aspect of the literary industry. They’d make great creative writing professors if they wanted to.

BD: You're studying to be a journalist. How has that helped, or hindered, your fiction writing?

K: Studying journalism has helped me to collect, verify and research data which I need for writing. I’ve learned about networking and made helpful contacts while studying media and through the activities that I’ve done for building my portfolio. Unfortunately, news writing is completely different from creative writing. So, it’s not very helpful.

BD: Indeed. I spent my early career as a newspaper reporter because I thought it would help. And you're right--the writing is totally different, but it did teach me how to research, how to interview and ask the right questions, and even get people who didn't want to talk to me to share their thoughts anyway.

Please describe your protagonist. What makes him interesting to you?

K: In Blood Stone Impact, there are three equally important protagonists. But the first part focuses on Damian Blood and Nick Park who are very different from each other and yet have certain similarities. Blood is a tall, hulking operator who leads a strike team for Taskforce COBALT, a covert unit of DIA and DARPA which handles scientific threats. The other side to him is that he’s a genius level mechanic and yet he’s immature, rash and wild. Park is an Army Ranger turned microbiologist who has given up his military career after a tragedy. He has spent five years curing cancer in an isolated lab only to have his research stolen and weaponized. Nick Park is drawn back into the action which he wanted to forget and has to face off against the men he had once trained and commanded. These characters make the elements of a conflicting plot. As an author, I take pleasure in putting my characters through hell and enjoy the ride that their lives are.

BD: How is the villain going to challenge your characters?

K: The main villains of Blood Stone Impact aren’t revealed yet in the Alaskan Storm. A few of the major antagonists play a major role in the next two novellas of the series. The villains here are a union of the most powerful groups that the world ever had. It’s an unholy alliance between the Templars, Ottomans and a few other groups who are thrown into a complex chess game with the Russians, Americans, and a few billionaires. Each novella in this trilogy focuses on one long sequence with an epic battle in an exotic location.

BD: What are you working on next? 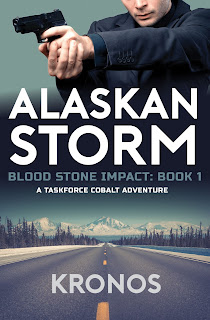 K: I have to start working on the sequel to Alaskan Storm, but I’m still researching for it. Currently, I’m focused on completing a short story that will introduce a couple of protagonists for two different Geo-political action-thriller series that I’ve planned to start. These books will be much more realistic and serious than the Taskforce COBALT adventures, though they’re set in the same world.

BD: Alaskan Storm is a great start to a great series and marks the debut of an author to watch. Thanks for taking the time to talk, Kronos, and good luck with the series. Buy Alaskan Storm at Amazon!
Posted by Brian Drake at 6:29 PM 2 comments: