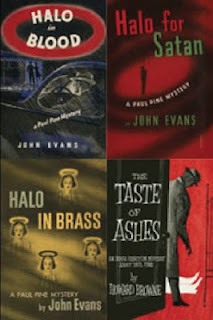 I am very excited to be able to get my hands on all of the books in one collection. Hurry, Santa, hurry!
Posted by Brian Drake at 7:02 PM 2 comments:

E-Book Experimentation, or: Back to the Drawing Board

For the last few months I've been releasing as a serial The Rogue Gentleman, featuring the adventures of globe-trotting thrill-seeker Steve Dane. I designed the stories to be read in one or two sittings and wanted to see if readers would support this new format.

Well, bluntly, the entire experiment has gone over like the proverbial lead zeppelin Tommy Page once joked about.

This has been discouraging, to say the least, and has caused some delay in the fourth and final episode in this first set, but it's almost done and should be out shortly. Nobody is complaining that it's late, so I'm not in any rush.

Unfortunately my other ebooks, steady sellers throughout 2011, seem to have suffered but I have no way of knowing if they've been affected by the serial or not. I can't imagine why, but you never know. The folks who have bought the older books have not come back for the newer ones.

So here's what I know: full-length novels sell.

Serialized books, at least my books in this case, do not. Perhaps you will have better luck should you go that route. Perhaps the idea of paying, overall, $4.00 for a story isn't appealing. I have no trouble selling some titles for the usual $2.99, so maybe that is truly the sweet spot price point.

It's been a fun experiment, and happily one that the new world of ebooks allows an author to attempt. It could have gone like gangbusters as we'd hoped, but that isn't the case. I also have the freedom, when the results are not what we'd like, to go back to what we know works.

So once The Rogue Gentleman #4: The Hard Way is done, and released, I will wait a few months, withdraw the serialized versions, and re-release it as a full novel along with a sequel that is already in the can. Steve Dane will continue with single-title, fully-contained stories.

I think we will all be much happier that way.

After The Rogue Gentleman II it will be time to turn my attention to the next book, where I plan on going back to my hard-boiled crime roots with a murder mystery called Kill Fever. I also have plans to bring back Mr. Pierce from Justified Sins, which I know some of you will be excited to hear, but that won't get done until 2013, more than likely after I finished Kill Fever.
Posted by Brian Drake at 1:37 AM No comments: