Interview with Steven Hildreth, Jr., Author of The Sovereigns 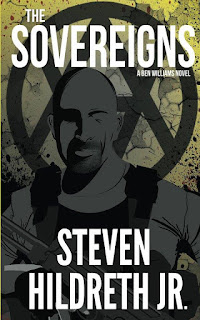 It's been a while since I've posted so I thought I'd get back in action with a chat with my Facebook pal Steven Hildreth, Jr., who has two top-notch thriller already under his belt and more to come, including an intriguing crime series we'll get more details on shortly. . . .

Steven is not only a combat vet of the Iraq war but also the author of The First Bayonet and his new book, The Sovereigns, which feature the exploits of Ben Williams, but don't think that he's just the latest macho he-man to grace the thriller genre. Steven has a way of making Williams a little bit different than your average touch guy.

1) Tell us about your new book.

The Sovereigns takes place a little over a year before my first book, The First Bayonet. Ben Williams has walked away from government service and has gone into the freight industry. It just so happens
that his delivery destination has been targeted by anarcho-capitalist terrorists. He can't walk away from something like that, so he takes action and gets more than he bargained for.

2) How would you best describe Ben Williams?

Williams is a real no-nonsense kind of guy. His sense of patriotism has been damaged because he's been screwed by the government more than once, but it's still there. Cynical and world weary, definitely. He still has a bit of a sense of humor and a very strong sense of justice.

3) As a combat vet, how does your experience affect what you write?

Being a vet gives me two advantages in this genre. First, I know generally how someone like Williams thinks as far as how he approaches situations. It gives me a technical knowledge that isn't as prevalent in the genre outside of the veteran author community.

The second is that I have an understanding of the psychology of violence. I think that's not delved into too often in this genre. Cops, soldiers, operators, paramilitary officers...these people aren't robots. There's a certain mindset that goes into the application of violence and I think discussing it humanizes these seemingly superhuman characters.

4) Who are your writing influences?

Doug Wojtowicz is a guy who ghost writes for the Mack Bolan series. He took me under his wing when I was about 14. I get my action scene descriptions from him. David Mamet is a huge dialogue influence. I love Mametian dialogue. Tom Clancy, Vince Flynn, Robert Ludlum, and Andrew Britton are all late authors that I definitely admire and sought to emulate.

5) If your series gets picked up by Hollywood, who is your choice to play Ben Williams?

Hands down, Dwayne "The Rock" Johnson. No question about it.

6) Will Ben Williams continue to be your primary effort, or do you have plans for another series or maybe stand-alone stories?

I'm actually working on making Williams my co-primary effort. I do want to work on developing a short story series that will revolve less around Williams and more around his mates to better characterize them.

Here in the fall, I'm going to start developing a crime thriller series for Amazon Kindle revolving around the Cleveland Police Homicide Squad. I'm aiming for six 15-20K word episodes (in comparison, The Sovereigns is almost 114,000 words) with a planned release date of January 2016. Then, I want to work on an immediate sequel to The Sovereigns for release in Summer 2016. If the crime series sells well, that will become my writing rotation.

Thanks for stopping by, Steven! Best of luck with the new book!
Posted by Brian Drake at 1:52 PM No comments: