The following is a never-before-heard discussion between director JJ Abrams and screenwriter Roberto Orci about creating the new Star Trek movie. This article contains bad language and spoilers so don't say I didn't warn you.

JJ Abrams: "So what are we going to do for the next Star Trek movie? I'm thinking of just calling it Star Trek 2. Because it's, like, the second movie. See how I did that right there?"

Roberto Orci: "That would be silly--there's already been a Star Trek 2."

JJ Abrams: "It's gotta have flash and dash and explosions and stuff because the audience can't follow a normal story. They're all ADDHDD what-ever-the-D kids, remember? But seriously, what are we going to do?"

Roberto Orci: "Let's do something original that Star Trek hasn't done before. It's the first voyage of the new crew, they're uncertain about how they might handle the challenge, and we really throw something tough at them. We can have some action but it should make you think--"

JJ Abrams: "Thinking is too hard, man. How about this: Maybe the Enterprise can go to a planet where all the women are blonde and wear black underwear and just stand around. We'll shoot it in high-def. Half naked blonde chicks will look great on the IMAX screen."

JJ Abrams: "No, no, no, I got an idea. Let's make the bad guy Khan, let's kill Kirk instead of Spock because that would be a cool twist...oh and let's make Khan a white British guy so we avoid any racial stuff because he's supposed to be, you know, like, all Indian and ethnic or something, and after we kill Kirk we bring him back to life so nobody starts crying, and boom-chicka-wow-wow there's our movie. Cash the check, bang some chicks, make another one. You in?"

JJ Abrams: "So what? Everybody who remembers is old and the studio doesn't care about them. We're going after the young people who weren't even born when that other version was made."


Roberto Orci: "But what's the story?"

JJ Abrams: "I don't know. They fly into space, have some laser battles....what else do you need?"

JJ Abrams: "I'm not paying you to think, dumb ass. Forget the story, forget originality, forget anything deep. I want blondes in their underwear, Vulcans kissing black chicks, a white Khan, and lots of explosions. Gene Roddenberry can go fuck himself."

I Don't Need No Rules for Writing

How often do you listen to advice? Any kind of advice? And how often do you ignore it? I think as we get older we ignore more. We've already heard a ton of it by a certain point and as we go forward the old advice stored in our memories is really no different than any new advice we may be given; we also get to the point where we say, "Fuh-get it," and damn the torpedoes because advice is like opinions and we all know what opinions are like.

That's what I think, nowadays, when it comes to writing. I enjoy reading about a writer's routines and how he or she planned (or didn't plan) a particular book, but when it comes to their "rules on writing" which we see a lot, I have no use for their remarks. When I was young, I certainly did. Boy did I! I thought there was a secret in there somewhere and if I sifted through enough advice, I would find it. Instead I found a lot of tips that helped me when I was starting out. Those tips improved my reading as well so I could see what authors followed those rules and which ones didn't. After so many years, I have decided that "rules on writing" are only for the writers who write those rules and really don't apply to anybody else. Are you listening, Elmore Leonard?

On this wonderful website, Brain Pickings, you'll find a ton of information about writers on writing and their rules for it. We still need this stuff because there are always people starting out, either teens like me back in the day or grown-ups who have finally decided that now's the time to write "that darn book."

But I look at these articles now the way a seasoned veteran looks at a cadre of rookies. You smile as you think of all the neat stuff they're about to learn, and you feel satisfied that you yourself have learned enough that, while you should always refresh so as to never get rusty (and that's an important point), you also know enough now to make up your own rules.

Which, in my case, I only have one. Tell the story in the best way possible. If that means using an adverb, then I'm using every adverb I can think of and if Stephen King doesn't like it, fuh-get him.
Posted by Brian Drake at 11:49 AM 2 comments:

Too Much Black Mask?

There was a time when I thought the hard-boiled writing style, as pioneered in Black Mask magazine, was the only way to write. I'm certainly not the only one, nor am I the only one to extol the virtues of the magazine and the writers who wrote for it and how they wrote, both individually and as a group. But I got to thinking today...has Black Mask been too much of an influence? Have today's crime writers neglected the development of their own voice in order to continue a writing tradition that doesn't necessary work all the time?

I think I almost fell into that trap. The stripped down style of Hammett. Chandler, Stark, et al, was wonderful to read and I worked hard to emulate it. Allegedly, I did it very well. The editors who bought my first handful of stories thought so, and even one who turned a story down said I had a "talent for this sort of thing" but as I moved from my 20s to my 30s I started reading different authors (like Leslie Charteris and PG Wodehouse and F. Scott Fitzgerald) and found a whole new way of storytelling that was just as wonderful as the hard-boiled style (you could make a case that Fitzgerald stripped his prose a little, but not to the same point Hammett did).

Based on reading Charteris alone, I started writing The Rogue Gentleman, and while there is still a mix of the hard-boiled in spots, the writing is much more filled out than what I had previously done. I wasn't comparing myself to Dashiell Hammett or Paul Cain or Frederick Nebel or any of the other hard-boiled masters. I was finding my own way and, I think, finally developing a voice that sounded like my own. Allegedly, I've done well with it.

With all of the adoration given to Black Mask and the hard-boiled style, is it choking off greater creative effort? Hard-boiled certainly teaches you the basics. Less is more. Get the action going. Be clear, pay attention to important details, have realistic motivations. But at some point, those training wheels have to be taken off and the writer must find his own voice. To continuously try to keep the tradition alive for the sake of the tradition itself doesn't do the crime and mystery genre any favors, and only continues the idea that hard-boiled fiction consists of dummies in trench coats and hats who talk out of the side of their mouths and carry a gat in each hand and end every sentence with "sister" or some other wise crack and lines like, "I got hit with a brick as heavy as Texas and after that the lights went out. I woke up with a slight headache that a couple of beers took care of, picked up my coat and hat, and went to find the fat man so I could give him back the brick."

Hard-boiled doesn't work all the time. Sometimes you need the extra details, the emotions, all the things that Joe Shaw said to cut. Sometimes you don't need them, too. Finding that balance is the key. I think I've found it, though I reserve the right to go back to the pure hard-boiled style when I feel like it. Because, while it's a good way to teach writing, it's also friggin' FUN.
Posted by Brian Drake at 5:52 PM No comments:

They finally did it. About a year or so ago, Centipede Press released the definitive collection of Paul Cain fiction--basically everything he ever wrote for Black Mask, etc. Paul Cain: The Complete Slayers collects every piece of fiction he published. Sticker price: $75. For some reason I didn't jump on it at the time, and now, since only 500 copies were printed, prices are between $140 and $200. I scored a copy for $140 on eBay. I have never paid that much for a book and, judging by the result of this one, I will never bother doing so again. But let me tell you the good stuff first.

The content is wonderful. It has the most extensive biographical information on Paul Cain than any other reference book I have come across, the reproduced magazine and book covers are terrific, the interior illustrations are amazing, and it's an absolute thrill to finally have all of these stories. I am a real Paul Cain junky. You can keep Hammett and Chandler and all those other guys. If I'm stuck on that desert
island, I want my Paul Cain books. 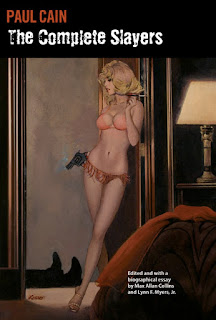 Not only do you get all of his short stories, but the book includes the original version of Fast One in its serial form. That's neat to see. Each story is connected, of course, but the opening of each installment includes background detail of what came before, and a few other extra lines, that were cut from the novel. (Now if I can only get the original stories that made up Red Harvest!) Cain changed a few names here and there but it's still the same fast-paced story that you either love or hate. I still say the only thing wrong with it is the ending, so I always stop reading where Grandquist says, "I forgot."

But for a book that was priced so high to begin with, and commands a premium now, you'd think the people involved in assembling the book (I'm looking at you, Keith Alan Deutsch--see comments below why I have omitted the other editors) could have hired a decent layout and copy editor. There are typos and extra words (the bio says Cain had "several two sons") as well as layout problems, where paragraphs don't quite line up and some lines of dialogue are on the same line. I paid how much for this? For such a handsome volume, with such pros with their names on the cover, it's sloppy, and disappointing.

But it is the mother lode. This is all the Paul Cain there ever was or ever will be. I will read every story very slowly. And then I'll read them again and again. They never get old. I read Fast One once a year!
Posted by Brian Drake at 1:13 PM 2 comments: