A few months ago fellow thriller scribe Matt Hilton sent out a call for submissions for an ebook anthology he wanted to produce called Action: Pulse Pounding Tales Volume 2, which you can now buy on Amazon for your Kindle. I sent Matt a story called THE FIXER which I submitted under my new pen name of Dean Breckenridge. I thought this would be a great way to introduce the Breckenridge name as novels based on the characters in THE FIXER are on the way. An author never assumes he'll be accepted first shot out of the box so imagine my surprise when Matt wrote to tell me he not only wanted my story but, despite 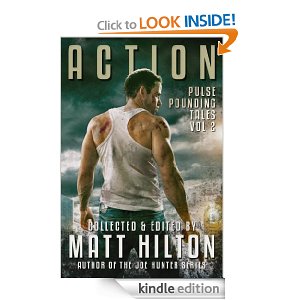 my asking, did not require any revision.

THE FIXER is hard-boiled crime piece and features a character named Wolf who is a middleman between cops and crooks. Sometimes justice needs a little help, and that's when Wolf comes in. If you have nobody else to turn to or if you're getting a raw deal, he'll be there. He answers to nobody but himself so he has no problem ruffling feathers on either side. And ruffle them he does.

Personally, I don't think THE FIXER is all that great. It's a character piece that I wrote to "practice" with the new concept. I'm not even sure how it blends with the continuity established in the novel featuring these characters; I may expand it into a full novel at some point, or I may ignore it entirely. This is the third time in 13 years of selling stories that something I've written has been accepted as-is. Let that be a lesson to those of you trying to figure out what's wrong with your story when it comes back with a rejection. Chances are, there's nothing wrong with it at all. You need to keep sending it out until you find an editor who likes it. When it comes back, send it out again. Don't even mess with the manuscript for one second. Not one. Not one single second. Don't even look at it.

I started using the Breckenridge name for hard-boiled pieces while I will continue to churn out thrillers under my real name. I think there should be separate brands, if you will, for each type of story, since they are different from each other, and those who read thrillers may not like crime stories and the other way around. The hard-boiled stories that have previously appeared as by Brian Drake will reappear under that name once I get some new covers--soon, I promise--as there is no reason to put them out under the new name when readers are used to seeing them under mine. But from now on, that won't be the case.

Anyway, should you be interested, ACTION 2 includes a terrific cast of writers who you should keep your eyes on, such as my pal Paul D. Brazill who has been kind enough to mention my work on his blog. Matt Hilton is tops, too, by the way. Why he hasn't had wider recognition I do not understand, but his Joe Hunter character is somebody you want on your side. I've often said that British writers are better than American writers, and he proves the point once again. So thank you, Matt, for the opportunity; I hope ACTION 2 brings you the audience you deserve.
Posted by Brian Drake at 7:25 PM 2 comments: