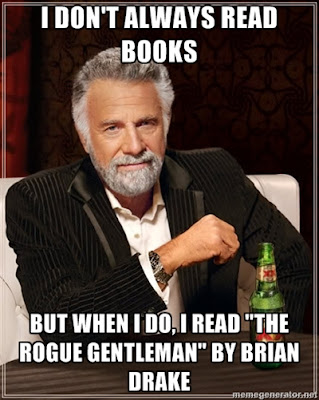 To coincide with the release of The Rogue Gentleman in paperback, the ebook is free until Friday! If you download it, all I ask in return is a review, whether or not you liked it.
Posted by Brian Drake at 1:23 PM No comments:

THE ROGUE GENTLEMAN NOW IN PAPERBACK!

THE ROGUE GENTLEMAN is now in paperback, available from Amazon.

Get your copy today!
Posted by Brian Drake at 12:53 PM No comments:

Fleming Find: The Man With The Golden Gun

I wish I had my digital camera to post a picture of this but it's in a box somewhere....

Anyway I was browsing through a used bookshop I had never visited before, and low and behold I found a stack of Ian Fleming hardcovers! Wow! Never before have I found such a treasure. I have a partial set of Fleming hardcovers already, but they are reprints, and the publisher did not do the entire series. Only Golden Gun and Octopussy were left out of the line-up, and I pretty much never thought I'd have even a shot at completing the set, but now I'm jazzed to find Octopussy.

I'm sure this book is a reprint. It does not have a dust-jacket, but the price (under $10) was right, so I grabbed it.

The Man with the Golden Gun was Fleming's last book, as you probably know. He died before putting the finishing polish on the story, and it shows in spots. I think the first two chapters are some of the best in spy fiction, as Bond returns from a stint in Russia where he was brainwashed to kill M. It's a terrific sequence, full of tension and suspense; after that, Bond is off on what is described as a suicide mission, but the stakes never really rise to that level. It's a pedestrian mission, really. There's a good bit of shooting at the end, and the last chapter really does put a lid on Bond.

If this is all we ever had to finish the series, it's not a bad dose. It's not the best, but it's not the worst, and Heaven knows that Fleming phoned it in a few times while perfectly healthy (a giant squid in Dr. No? Really, Ian?) so we can cut him some slack here.

Of course, much later after Fleming died, came the continuations. I don't talk much about them, though I did like John Gardner's work, especially Licence Renewed, which I've always considered a home run. I think his first three Bond books were very good. We can nitpick those at a later date, perhaps. In fact, I'd like to. Better go get the Gardner reprints and see if I can find the first continuation, Colonel Sun.....the less I say about Raymond Benson's work, the better. Benson is a fine writer, but I didn't like his version of James Bond one bit.

So where's Octopussy hiding?
Posted by Brian Drake at 12:51 AM No comments: