This morning I finalized a five-book deal with Liberty Island, a small press in New York, to bring out my Steve Dane thriller series in print, ebook, and audio editions. This officially makes me a "hybrid author", or one who has a traditional publisher, but also self-publishes. I will continue to self-pub other material (mainly my Stiletto series) while giving them exclusive rights to publish the three Dane books already out (after some revisions, and my editions will be removed from Amazon by the end of today) and the two that are written but haven't been electronically published, with an option on more should we wish to continue the effort. This is the result of months of back-and-forth, and it feels good to finally be done and moving forward.
Posted by Brian Drake at 2:31 PM No comments:

Get Carter: The Original Brit Grit

I wondered why. Here we have one of the seminal works of 1970s crime fiction (originally entitled Jack's Return Home) that takes place in an industrial town in Britain. We have great local color, terrific descriptions of the hard life of the town, gritty descriptions of the criminal element that hides just beneath the surface, and a terrific anti-hero who returns to his hometown to right a wrong and doesn’t care if he has to blow away his old buddies to do it.

What was the problem? It took until the middle of the book for me to figure it out.

In the years since Get Carter, a gazillion writers took what Ted Lewis did and populated book shelves with so many copies that they ruined the original in the process. It took a long time for me to read Get Carter because it was out of print, but I knew all about it. I’d seen the movie, of course--loved it. I’d read all the praise about it--is there a bad review? Thanks to Soho Press and its recent reprint (they did all three Jack Carter books), with a fine introduction by Mike Hodges, who directed Michael Caine in the movie (the remake? fuhgeddaboutit!), I finally snagged a copy. Didn’t think twice. I was going to finally read this classic piece of crime fiction that had eluded me for so long, yet found it disappointing.

Once I realized what had happened, I took action. I went back to page one. I put out of my mind all of the copycats (even Spillane used the same plot and same general story devices in The Deep, though that book pre-dates Lewis) and started over.

And … wow. Anybody who writes or wants to write should memorize the opening chapter, which establishes such a sense of urban decay you wonder if Jack is taking a train into Hell.

All I can say is that Get Carter deserves its reputation, and going into too much of the book’s plot shouldn’t be what we focus on. What should be highlighted is the writing style of Lewis and the intensity of the place he creates. This isn’t swanky, swinging London he’s writing about. This is a town with industrial smokestacks scraping the sky. The pubs are dirty. The people in them are dirty. The streets are dirty. The gangsters fight dirty. There’s no trick shots or fancy gunfights. When guys get hit, they hurt. They spit blood. They got knocked down, and before they can get up, somebody grabs them by the hair and smashes their face into the muddy asphalt. You feel it, man. You feel every hit. You can taste the grit.

Get Carter isn’t so much a book about a man returning to the home he left behind to avenge his brother’s murder, even though it is. It’s more about a man coming to terms with his past, his mistakes, and how he has to live with those mistakes. Jack Carter is really avenging himself, his brother is just a cipher, a catalyst for Jack’s existence. He’s a tough man who once thought he had all the answers and soon discovers he doesn’t know the answers after all; in fact, he’s changed so much, become so soft, relying on his former reputation, the bad guys get the edge. And that gives us one of the biggest sucker-punch endings in crime fiction. It’ll make your eyes bleed, because you want Jack to win, and then you realize Jack is you. We all grow and change and sometimes we go back where we came from thinking we know everything and then life smacks us across the face with the fact that we don’t know anything at all. We just fooled ourselves into thinking we did.

That’s what the other guys missed. The imitators could do the action, sure, but they couldn’t get the feeling. They couldn’t put you in that place. That’s the wonder of the late Ted Lewis, who left us way too soon, and why Get Carter is so revered and deserves to be discovered by a new generation of crime readers. The best crime fiction teaches us about our world and a little about ourselves; Get Carter does that, and belongs among the best.
Posted by Brian Drake at 10:17 PM No comments: 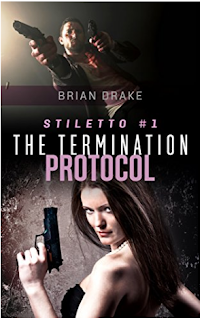 It's launch day for Stiletto #1: The Termination Protocol, and I do hope you take a moment to check it out.

Some of you longtime readers may remember a couple of years ago when I did TPP as a stand-alone Stiletto story. Well, I decided to make some changes and use it as the start of a series when (a) I needed a break from The Rogue Gentleman but wasn't sure what to write and (b) a friend said he really like Stiletto and would like to see more. So a little updating here and there and we have a new version of an old book.

It's confusing, I know.

If you bought the old book and don't want to buy it again, email me using the form on the left side of the page. You'll have to answer some questions about the old version, though, before I send you the new one, but I'm happy to send it along as a thank-you for your past support.
Posted by Brian Drake at 1:39 PM No comments: