I was happy to find a UK No Exit Press edition of Paul Cain's FAST ONE the other day. I had no intention of reading it. I thought it would be neat to have and the introduction and facsimile of Cain's original book jacket bio was neat too. But over the holiday weekend I needed something to read so I grabbed it. And then it grabbed me. Like never before. This is probably the third or fourth time I've read the book, and while I've previously written on the topic of Cain and his work, this time I want to amend that article and say that, yes, Paul Cain's FAST ONE is the hardest hard-boiled novel ever written and deserves all the praise and wonder it has received since the original publication date. (It also deserves the complaints.) 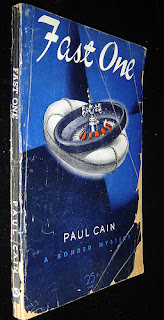 I don't know what has happened this time, but I can't put this book down and I'm more entertained by the "plot" than ever before. It rockets along like an express train. The characters are thin, yes, but they work well together. How can you not like Kells and Granquist and especially Shep and Borg? They reveal themselves through dialogue and behavior, even erratic behavior. Cain knew how to characterize, he wasn't being lazy, I just think he was doing something different and critics yesterday and today couldn't keep up. I just wish he would have ended it differently.

The fact that FAST ONE moves so fast--ha ha!--and works so well as a whole is amazing to see and I don't know if it has ever been duplicated. Chandler came close in one of the middle sequences of The Big Sleep, but then tapered off. I can't think of anybody else who has done anything close.

I suppose there are some of you that have never read Cain; if that is the case, stop reading this and go acquire a copy of FAST ONE post haste.
Posted by Brian Drake at 1:03 AM 1 comment:

Here is what is great about indie publishing, authors are able to create properties that couldn't be done by legacy publishing, and Paul Bishop's wonderful Felony Fists series is one such example.

Paul and a team of authors are cranking out these books.  According to Paul, "These books are inspired by the sports pulps of the '30s and '40s, such as Fight Stories Magazine and Knockout Magazine, as well as the Sailor Steve Costigan fight stories by Robert E. Howard from the same time period."

The first book, Fight Card, is already out, as is Felony Fists #2: The Cutman, written by the wonderful Mel Odom, who entertained me in my youth with his contributions to The Executioner series (and I'm sure he's glad to be reminded of those!).

Paul gave me a sneak-peak at Fight Card and it's terrific. The plotting is great and Paul brings his usual crisp writing style to the party. Best of luck with the series, Paul!

Patrick “Felony” Flynn has been fighting all his life. Learning the “sweet science” from Father Tim the fighting priest at St. Vincent’s, the Chicago orphanage where Pat and his older brother Mickey were raised, Pat has battled his way around the world – first with the Navy and now with the Los Angeles Police Department.

Legendary LAPD chief William Parker is on a rampage to clean up both the department and the city. His elite crew of detectives known as The Hat Squad is his blunt instrument – dedicated, honest, and fearless. Promotion from patrol to detective is Pat’s goal, but he also yearns to be one of the elite.

And his fists are going to give him the chance.

Leading with his chin, and with his partner, LA’s first black detective Tombstone Jones, covering his back, Patrick Flynn and his Felony Fists are about to fight for his future, the future of the department, and the future of Los Angeles.
Posted by Brian Drake at 12:54 PM 2 comments: