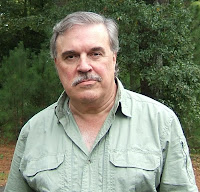 Of all the authors who influenced me when I first started writing, Jerry Ahern is one of the top three, the other two being Ian Fleming and Robert Ludlum. Ahern is the author of close to 100 novels, and you probably know of some of them. Such series as The Survivalist, The Defender, Track, and The Takers bear his name, and that of his wife, Sharon, his co-author.

Ahern kept the actions and reactions of his characters fresh by putting himself in their shoes, something he calls “method writing” as opposed to method acting. And this method writing brought out the kind of attention to detail not every author adheres to.

“We have a real passion for realistic detail,” he said. “We try and actually make people suspend disbelief by anchoring the situations in reality as much as humanly possible.”

“In a gunfight we actually count the shots.” he said. “There are [also] a few [of my] books I’m aware of where the main character starts out standing in the forest taking a leak. People rarely eat or answer nature’s call in fiction. The more you suspend disbelief the more you want to put in realistic detail.”

Through it all, Ahern maintains a simple philosophy when it comes to his fiction.

“You want to write things you’re interested in reading. If you’re bored with it, readers will be bored too.”

Thinking back over his body of work, Ahern summed it up this way:

“I was writing about things that were commercial. I wasn’t going to write the great American novel that no one was ever going to read. If you write the great American novel and nobody reads it you haven’t done anything. If you write an adventure story and get good ideas across to people, you have done something. Sharon and I would much rather touch individuals with good ideas and thought-provoking situations for them in a way that is palatable rather than get that message across in a way that’s non-palatable that people won’t necessarily read.”

And while there hasn't been many spine-tingling thrillers emerging from his typewriter lately, Ahern hasn’t stopped writing.

In March of 2010 you’ll see an interesting book coming out, “Survive!--The Disaster Crisis and Emergency Handbook”. Ahern calls it “a practical guide to what you can do to stay alive” during a disaster. (Perhaps it will finally replace my old, worn out Boy Scout handbook!) Also, Ahern just finished a new novel, but there’s no news on that yet. Hopefully it will be released soon. The Soviets may no longer be the villain of choice, but there are plenty of terrorists running around the world, and real life good guys, as usual, are hamstrung by rules and regulations and political correctness. Get that new book out quick, Jerry. The world needs your kind of hero now more than ever.