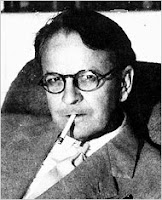 You don’t get very far as a reader of hard-boiled literature without hearing how “great” Chandler’s “Red Wind” is. The first paragraph gets all the attention and is, I think, the highlight of the story. It reads:

There was a desert wind blowing that night. It was one of those hot dry Santa Anas that come down through the mountain passes and curl your hair and make your nerves jump and your skin itch. On nights like that every booze party ends in a fight. Meek little wives feel the edge of the carving knife and study their husbands' necks. Anything can happen. You can even get a full glass of beer at a cocktail lounge.

Chandler maintains the wind motif throughout the story. The wind is always banging against window, kicking up dust in the streets. You get the sense that such a condition is really a detriment to the city and its inhabitants. Throughout the mayhem Philip Marlowe (or whoever the original detective was, my version has Marlowe’s name in it) solves a murder and tries to track down some missing pearls.

My copy of “Red Wind” comes from the “Trouble is My Business” collection; I also have it in the Everyman’s Library edition which contains every short story Chandler wrote (an excellent volume; if you don’t have it, you should, it’s a great way to see how Chandler developed as a writer). Overall, I think Chandler wrote better short stories than “Red Wind”; after the hook of the first paragraph, you'll find the rest of the story a by-the-numbers caper. Chandler’s characterizations are terrific (the cop, Copernik, for example, always combing his unruly hair and behaving like a corrupt punk), but Chandler always excelled in making you see his supporting characters, probably better than we can see Marlowe.

You have to give a guy some slack while he’s learning and finding his voice, and by “Red Wind” Chandler didn’t totally have it. Jump over to the first Marlowe novel, and you can see how much he learned and improved over time. Read through the short stories Chandler used to partially construct that first novel, and you can see even more improvement, but for a good murder mystery and a good pulp story and a great slice of life in Southern California when those hot winds are blowing, “Red Wind” is as good a read as you can find.

I have also listened to the radio versions of "Red Wind", both with Van Heflin and Gerald Mohr playing Marlowe, and it doesn't translate very well. The Heflin version is quite boring. Gerald Mohr excelled as Philip Marlowe and his appearance in the rest of the Marlowe radio series is a treat. He sounds like Marlowe should sound, but he’s the young Marlowe, and not the man we later meet in The Long Good-bye. But don't get me started on The Long Good-bye. We'll be here all night.