The (Reluctant) Birth of a Series 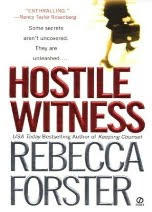 Editor’s Note: Rebecca Forster has been a friend of mine for nearly 20 years, in which time she has published almost as many books. She graduated from paperback romances to the exciting world of legal thrillers and, like Grisham, knows the territory. But, typical of midlist writers in the last decade, has had her share of ups and downs. Now that Amazon is letting authors make their work available on the Kindle, she is taking advantage and having a great time with great sales to match. The Witness series, featuring attorney Josie Baylor-Bates, the subject of this article, is a consistent seller, more so than it ever was when originally published in paperback. I recall reading Hostile Witness, the first episode, while working the graveyard shift at KCBS-AM in San Francisco, and it was such a hot read that I’d get really cranky whenever I had to put the book down and open my microphone to actually get some work done. Now Rebecca is continuing the Josie series specifically for the Kindle market, and I cannot wait to see the results. So here is Rebecca, in her own words, sharing a little about how the Witness series came to be, and the challenges of writing about the same characters over and over again.

Hostile Witness was supposed to be a stand-alone book and then the editor fell in love with the characters and a series was born. Silent Witness and Privileged Witness followed.

A few things stand out about this turn of events in my career.

First, I was thrilled that the first book was exciting enough for an editor to ask for more. Then the excitement wore off, and real concerns presented themselves.

Hostile Witness had a solid story and plot. It was inspired by my husband, a superior court judge, who had just sentenced a sixteen-year-old boy to life in prison as an adult. The boy had murdered three people and the question of when a child becomes an adult in the eyes of the law intrigued me. In writing Hostile Witness, I found a drama that proved compelling for readers. Would I be able to follow up with equally dramatic stories?

I also had to ask myself if I liked these characters well enough to continue to write about them. Were their voices unique enough? Did they deserve a long life or would readers tire of them? Had they been created with finite motivations? Those questions created a pressure I had never experienced before. In all honesty, most of that pressure was self-inflicted as I worked to make the second book as good as the first.

Finally, I wondered about the technique of series writing. After writing 20 books I realized I didn’t know anything about writing continuing characters.

Here’s what I discovered as I worked through these concerns.

Stories are compelling because they are inherently good. The next book in my series simply had to be a story I could embrace with as much passion as I had Hostile Witness. If I could do that within the parameters set by my characters, all would be well.

As for the characters, I loved them in the first book so there was no reason I wouldn’t like them even better in the tenth. I had heard that Sir Arthur Conan Doyle came to hate Sherlock Holmes. I would never want to feel that way about Josie and Hannah and Archer. Knowing that, I have a final book plotted and put away so that I will end their literary lives gracefully. For now, though, I can’t imagine using that story. I love these people. I want them to live and thrive.

Finally, I tackled the question of technique. Do series characters age? If not, how can they grow? Was it mandatory to have each of the pivotal characters in every book? How often--and with what intensity--do I reiterate descriptions and back story? Not every reader will pick up the first book nor will every reader will want to read the whole series. Where do I draw the line with background information?

I discovered there are no hard and fast rules when it comes to creating a series. I have taken each book as it comes. I let the characters speak to me and the story dictate how those characters will grow and change.

Now, working on book number four--Expert Witness--I continue to feel a bit reluctant about writing a series. With each book it is a challenge to include the subtleties that have come before, the shading of character, of time and place, the tone, and to build upon them. Each book must tie to the ones before it while also being a viable stand-alone read. I have to live with decisions made without thought--the color of a car, the style of a haircut, the indication of a food preference.

Yet, there is also the excitement of stepping back into the lives of these people I have created and come to know so well. Like my readers, I am always curious where they will end up and if they will live to tell another story.

The funny thing is, Josie, Hannah and Archer don’t seem to sense my reluctance at all.