Hard-Boiled Bogie, or: You Know How to Whistle, Don't You, Steve? 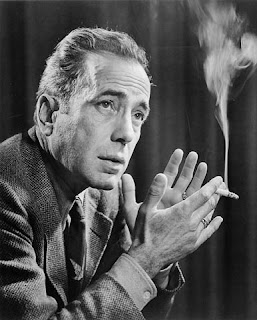 To Have and Have Not is on the television right now and I think it's one of the best movies, with one of the worst belly-flop endings ever put on film, that Humphrey Bogart starred in. He made a lot of good movies, but there are three that stand out because of their hard-boiled elements, especially with Bogie's character, and I'd like to go over them with you.
To Have and Have Not gives us shades of Casablanca without Bogie crying into his scotch. We get intrigue in occupied territory and Bogie's Captain Morgan (love that name--was Hemingway drinking that wonderful elixir when he wrote the novel?) is the cautious outsider trying to live his life as peacefully as he can without getting into the fight. He does things his own way, looks out for himself, but once he's drawn into the fight for personal reasons he ends up making a sacrifice that changes his destiny for the better. It's a great little war story dampened only by the ending.
Then we have Key Largo, a masterpiece of tension; again, Bogie shines as the tough independent outsider who won't let the bad guys fool him and saves the day. If To Have's ending fell flat, Key Largo ends with one of the best fights ever, where Bogie finally gets even with Edward G. Robinson. If you haven't had the pleasure, check it out right away.
So what's my third favorite hard-boiled Bogie film? The Maltese Falcon, of course, and there's nothing more I can say about that terrific movie that hasn't been said already.
I wish I could put Casablanca on this list. I love the movie. If I could pick a movie world to spend the rest of my days in, that would be the one. It's just right, despite one of the worst plot holes in film history that could have been corrected with a simple line change. But it doesn't even earn Honorable Mention, because in Casablanca, Bogie cries. Over a woman, no less. He even pounds on the bar with his fists! Gak! Sorry. Casablanca is out for that reason. Hard-Boiled Bogie does not cry.
Posted by Brian Drake at 8:04 PM