I first discovered Dutchman and fellow crime scribe Jochem Vandersteen on the Thrilling Detective Website, which published his short story Stalking Amanda one month before my first short story on the site appeared (under my real name--I challenge you to try and find it!). All this to say that I was impressed with Stalking Amanda and have kept an eye open for Jochem's future efforts ever since.

I'm happy to report that Jochem is taking the indie plunge with a collection of short stories featuring security specialist / private eye Noah Milano, called Tough As Leather. You can buy it on Amazon.

Tough As Leather is not the only book Jochem has available; the other is a novel, White Knight Syndrome. Start with the short stories to get a real feel for what Jochem is doing. Noah Milano is a great character. I think he's the first private eye to be a young buck into the things that young bucks are into. His back story is what grabs me, though. Noah comes from a family hip deep in the Mafia, yet he wants nothing to do with that lifestyle. He's "gone rogue" and the stories drip with the conflict resulting from that break. 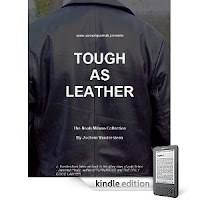 But enough... here is my interview with Jochem:


BD: I like the idea of Noah Milano being an outsider. He's not an ex-cop; he's not a bored ex-solider who got into PI work; he's kicking the teeth of his family and going off on his own. What inspired his background? Did you choose it to be different, or do you have plans of making the struggle with his mob-connected relatives, and the promise he made to his mother not to hurt people, a key part of each story?
JVDS: From the get-go I was sure I wanted to write a PI novel. I also knew that I wanted to make my PI just a bit different from the others that came before. Some differences were his age (younger), taste in music (not jazz or blues but metal), profession (security specialist rather than official PI). The main difference was his background. I'd seen too many ex-cops and decided I had to come up with a past that wasn't seen before. So who could be a tough guy with gangster connections and NOT be in law enforcement... A crook of course! I also decided I DID want the character to be a noble one like Marlowe, Spenser and McGee. So I came up with the redemption angle, his wish to be a good man in a bad world. The tv show Xena showed me what you could do with a concept like that, silly as that show could be. Sometimes his background won't be very important, but especially in longer stories and in the future we will see how his struggle with his family evolves.
BD: Why set the stories in the US? Why not your home country?
JVDS: I grew up on US PI stories, so that's what I wanted to write. The LA setting especially fascinates me.
BD: Name a contemporary crime writer you think should be better known and why.
JVDS: There's several. David Levien and David Housewright manage to turn out amazing stories with fantastic tough guy characters and sell okay but not enough. Also, Wayne Dundee has been at this game very long and should get more credit for hanging in there.
BD: What did you do to reach out to the major authros who commented on your stories, and what was your reaction when they responded so positively?
JVDS: Through the blog www.sonsofspade.tk I interviewed a lot of PI writers. I just asked them to take a look at my stories and most were happy to do so, great guys and girls as they are. It was very rewarding to get such positive responses. I don't sell a lot of books but I'm in this business to entertain, and if you can entertain your idols that is great.
BD: Can you give us a glimpse into Noah's future after TOUGH AS LEATHER?
JVDS: I've got several plans. He will be popping up in several e-zines in the future for sure. Also, I'm playing with ebooks more and more. I've got a new Split Novel coming up with another PI writer and I've got plans to release a Kindle magazine featuring several PI stories from several writers. There will be a Noah Milano tale in there as well. A lot of it depends on the sales and interest for Tough As Leather, though.
Posted by Brian Drake at 2:55 PM