Well we are delighted to welcome Anonymous-9 to our abode where she agreed to talk to us about her new ebook, HARD BITE AND OTHER SHORT STORIES, which is currently masticating its way up the Amazon sales charts. Ten stories in all, HARD BITE won Spinetingler's Best Short Story on the Web 2009 and 4 others got nominations, including a first-round Thriller Award nomination. 99 cents at Smashwords and Amazon Kindle. 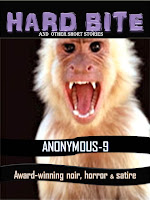 But this is not your average interview; in my conversation with Anonymous-9, we talked about elements in her stories that raise them above the average blood-and-thunder short stories. Read on:


Brian: I was surprised to hear you suggest an interview based on spirituality and morality in your short stories, because one might be hard-pressed to find any moral center in stories about killer monkeys and women who poison the wives of men they want to sleep with. Please explain.

Anonymous-9: Thanks for inviting me to your blog, Brian. Glad to be here. Let's leave killer monkeys for the moment and talk about a woman who kills for the man she wants. Who hasn't seen an attractive person and thought, "Wow, if his or her fiance were out of the way, I could go for some of that!" Everybody has had that thought at one time or another, so I ran further with it. KILLER ORGASM is the story where my main character (spoiler alert!!!!) kills the wives of men she wants to marry. For a short time it works wonderfully. But eventually she dies by her own sordid hand. She gets done in by this thinking, she doesn't get away with it. The story shows where our ordinary, selfish thinking will lead if it runs amok. That's a morality tale, don't you think?

B: Do you start each story with a theme or "moral" in mind, or do these elements come later during your editing process?

A9: No, these elements come as I develop the story. For example, in my story CLAW MARKS, I wanted to tell a classic noir tale of a man and a woman--man rescues woman from bad husband, husband comes and takes revenge. Simple, huh? We've all read that story a thousand times. The question in my mind was, "How can I make this different? What element can I change in this classic storyline so it feels fresh at the same time that it feels familiar?" The element I changed was the point of view of the storyteller. The storyteller (spoiler alert!!!!) is a cat. Cats are killers and they feel very little compassion for living beings not directly associated with their own welfare. Even then, cats are iffy. So the cat was the perfect, psychopathic narrator for the story, emotionally unaffected by the human behavior he observes. He forces the reader to fill in the morality and ethics part on their own.

B: So are there a list of themes you want to write about, or does the theme of a story emerge as you're writing? Would you reuse certain themes if you had more to say about the subject or try to find something new each time?

A9: Themes emerge. I can't imagine a more turgid way to write than something designed to lecture people about morality. I guess my most common theme would have to be how murderers and extreme criminals are not that far off from the ordinary person. We all have crime in us, including killing. A few of my stories show how the wrong place, right time, will turn Rebecca of Sunnybrook into Rebecca of Donnybrook. Some people don't want to admit they have a dark side, or the potential for a dark side. I find it frightening and dangerous, that lack of self-awareness.

B: Why do you think people deny their darker nature? Do you think we read crime fiction to find some way of exorcising that nature?

A9: Whether you believe that humans evolved or were created by God, both schools of thought pay tribute to our animal natures. The evolutionary school of thought admits we are carbon-based organisms with a brain cortex similar to the lizard with all the attendent animal impulses. Theology states that although we are made in the image of God, we're also half animal--super-intelligent primates. It's a constant battle to overcome our animal nature. Some crime fiction is just a walk on the wild side, crime for entertainment, a pleasurable roll in the gutter that allows us to be voyeurs watching how "bad" people do it with no personal responsibility. I don't think crime fiction exorcises that nature. There's no exorcising who we are. I think crime fiction can put us in touch with it, for better or worse. It's the responsibility of the reader.

B: So who are two or three other authors who you think best handle the type of theme you write about? They don't have to be crime writers, either.

A-9: John Burdett rocked publishing with Bankok 8 and Bankok Noir, has a series based on a Buddhist detective in Thailand. The character who does a beautiful job of passing along Zen philosophy without moralizing or his clumsy asides. In my view, Burdett is one of the freshest, most original crimewriters of today.
Tom Robbins doesn't write crime, but he evokes a surreal atmosphere that seems acquainted with meditation, or kabbalistic philosophy or Buddhist teachings. A certain spiritual cosmology  backdrops Robbins' writing. Keep in mind that these philosophical roads of thought all come with warnings that they can drive the student crazy. That's my disclaimer.

There is a great site for clerical detectives. www.detecs.org Christians, a few Jews and Buddhists are represented. I think Christianity is under-represented in modern crime fiction. Many law enforcers depend on their faith to guide them and keep them sane while dealing with the worst of humanity. But they're rarely represented in prayer or evoking God. I think there might be an eager market waiting for something along this line. Myself, I love mocking the Devil. I wrote about the bureaucracy of Hell in a story called M-N-S. Anthony Neil Smith edited it. We pulled out all the stops with that one.

Brian: What have you got in the pipeline and what's coming up?

A-9:  HARD BITE is in rewrite as a novel. I'm trying to get it ready by the new year.

B: How has the audience reaction been to the short stories so far?

A-9: It's always great. Yes, I may be a little extreme for some, but those that like my stuff like it a lot. I do well with critics, and for that I'm very grateful. Readers are the ultimate critics, though. That's why Amazon Kindle and Smashwords are so empowering. Agents and editors based in New York with their geographic filters, political filters, racial filters in place about "what fiction should be and say" no longer have a stranglehold on publishing. E-books are the free-est, most unregulated, unencumbered market in the world right now. It's the writer's time to howl.

Bloggers are the new Town Criers and advertising outlets. They find new writers, new works, and tell the world. They're the ones who help books "go viral." It's all free. But I better have a great story and give good blog. I'd also like to say that my experience has been, regarding awards and nominations, at least, it doesn't matter who you know or where you live. Story trumps all. I was completely anonymous when I got my nominations, nor was I a member of the International Thriller Writers. They didn't know me from dirt. But they liked my story. That's all there is to it in the end really, the story.
Posted by Brian Drake at 4:07 PM