REVIEW: How to Survive Anything by David & Yetta Kane

How to Survive Anything has been a hard book to review. It makes you take stock of your life and evaluate how you see yourself and your current situation. But I'm getting ahead of myself.... 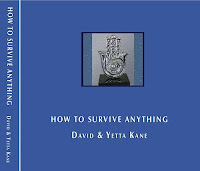 The book is about a couple who lived separate lives prior to World War II and weren’t bothering anybody, but then a poor excuse for a carbon unit decided he wanted to start a war. This couple fought their own battles through that war, on the run, in the camps, and neither survived unscathed.  Mothers, fathers, siblings, entire life histories were lost.

What they did with their lives after emerging from the battlefield is where their story really begins.

The Kanes tell a story of Rising Above. Fill in your own blank after that.  In their case, the horrors of World War II. In your case…what? Abuse? Sickness? Fear?

After the war the Kanes came to the United States for a new start, and they have certainly made the most of that start. There was no time for a pity party. There were only new opportunities! As a rabbi, David has used his position to change the story of his life from despair, fear, and death, to faith, hope, and love. Who else does that? Why is it so easy to stay negative and define ourselves by our troubles?  And don’t give me any “I don’t like religion” garbage—you don’t have to be religious to “get” their story. This is a story about people of faith, yes, but if you dismiss it because of that you're wrong to do so. What the Kanes made me realize is that the rough patches in life are indeed patches and our attitudes shape how we recover. David Kane tells a great joke about a fellow who broke a leg in an accident, and started laughing.  When asked why he was laughing, the fellow said, “I could have broken them both!”

Attitude is everything, they say. You can remain down in the dumps, pulling a woe is me act, but if you do you will always be in that place.

Or you can be determined to survive and stay positive and know that there’s Something More for you Somewhere Out There and go and find it.  It took many years for the Kanes to see the fruits of their efforts; now, with a family that has multiplied beyond their dreams, a ministry, if you will, that reaches thousands every year, they can look the past in the eye and say not only did they survive, but we thrived, and we took what somebody meant for evil and turned it into good. They speak at a lot of high schools, and the letters section of the book, which displays the feedback from students, makes one believe that perhaps the U.S. is more than a population of mush-headed bon-bon sucking half-wits who vote for a hand out.

I don’t mean to write such a charged review, but the constant weeping and gnashing of teeth that Americans have demonstrated since a certain someone was elected in 2008 leaves me sick to my stomach. Students are protesting high tuition costs? Can’t find a job? Gas prices are too high? Can't retire? Cry me a river! Would you prefer to be marched naked into an oven or forced to play a violin while others around you burn stacks of bodies that contain the remains of your relatives? Americans need a wake-up call louder than any trumpet Gabriel can blow.

The Kanes paint a picture of two individuals who said NO to the pity party and carried on with strength and courage.

Remember, Hitler blew his brains out.

But the Kanes are still alive.

How to Survive Anything by David and Yetta Kane is available at Amazon.Com.  Here is a link to their personal website and I encourage you to check it out.

Your education as a human being is incomplete until you read this book.  It’s going to be one of those books you keep around for when you need a reminder that nothing can defeat you except yourself.
Posted by Brian Drake at 7:31 PM