I recently met author David Angsten at the Taliesin Nexus writing conference in Los Angeles, and invited him to the blog to share a few words about his career and latest book, The Assassin Lotus.

David started out as a screenwriter and recently turned to novels. His work is a great alternative for thriller fans looking for something that doesn't feature terrorists or commandos, which they all seem to nowadays, and not that there's anything wrong with that, but even I like to alter the diet now and then. His first novel in the Jack Duran series, Dark Gold, featured a sea monster; The Assassin Lotus concerns a plant certain people are willing to kill for. (Must be one heck of a plant.)


Brian Drake: Tell us about your hero, Jack Duran.

David Angsten: I’ve always preferred stories featuring “regular guys” forced into intense situations. I was weaned on Hitchcock movies, and I always liked his off-the-street, unassuming heroes—gee whiz family man Jimmy Stewart, martini-toting ad exec Cary Grant—who find themselves suddenly in over their heads. They’re forced to react. You get the sense they’re surprised at what they draw out of themselves. Both good and bad.

That’s the kind of guy Jack is. He appears in all three books—a sort of coming-of-age trilogy. Blindness was the central theme in the first book, DARK GOLD, when Jack was fairly young and naïve. But gradually he grows into a greater self-awareness, which is largely what the process of maturing is all about. An old idea. “Know thyself.” The ancient Greeks carved it on the Temple of Apollo—the setting for the opening of Jack’s second adventure, NIGHT OF THE FURIES.

BD: You've done three books with Duran and his brother. Are they entirely made up, or do they share aspects of your personality?

DA: By definition, every imagined character shares some quality of the author. Jack shares my ambivalence, my sense of humor, my fascination with women, my interest in art. But I suspect he’s a braver man than me, though the truth is you never really know until you’re tested. 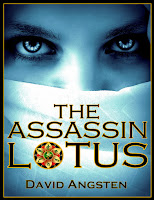 His brother Dan is brilliant and passionate about ideas, but he tends to miss the subtleties in relationships. He’s also annoyingly confident in his theories and beliefs. Probably, like me, he’s covering up his doubts. But unlike me, I don’t think he’s aware of it.

BD: THE ASSASSIN LOTUS is dedicated to your mother. Do you write anything you wouldn't want her to read?

DA: As a 91-year-old reader, she’s pretty much seen everything. But yeah, there’s a reason her dedication had to wait till the third novel.

BD: Most thrillers these days feature spies or commandos or some kind of political conflict, but you've taken a different course. What prompted you to go with sea monsters and ancient psychoactive elixirs rather than the same-old-same-old?

DA: I got into the idea of a sea monster story when I realized it was the oldest thriller genre in the world. It goes back from the Bible and the Greeks all the way to Tiamat, the Babylonian sea monster story told over 5000 years ago. American versions include Melville’s Moby Dick, Hemingway’s The Old Man and the Sea, all the way to Benchley’s Jaws and beyond.

The next two novels grew out of a longstanding curiosity. There are two very mysterious and legendary ancient drugs: kykeon—the elixir of the Greek Eleusinian Mysteries, and soma, the psychoactive drink that’s praised in the early Vedic texts of Hinduism. The source of these two drugs has long been lost to history. Jack’s brother Dan is an paleoethnobotanist obsessed with uncovering the truth about them.

I think they make great MacGuffins. They allowed me to explore what I’m most interested in—mythology, belief systems, culture, religion. Not to get too grandiose about it, but what I’m really interested in is human consciousness. How we shape and channel and attempt to organize it. How we try to make sense of the world.

That may sound too ambitious for an action-adventure thriller. But I reject the idea that it’s “only a genre novel.” Mystery, action and suspense are essential, but there’s no reason you can’t explore big subjects and ideas. Writers too often get stuck in a rut, tilling the same dead ground. I suppose it’s good for marketing. Readers like to know what they’re buying. But really, how many more serial killer stories do we need?

BD: How has your background in screenwriting helped your novels? Or are they two different species that have no bearing on one another?

DA: Fran Lebowitz said screenwriting’s not an art form, it’s a punishment from God. After ten years of punishment I can’t disagree. I think it’s much more difficult than novel writing, with many more restrictions. But screenwriting taught me structure. That’s really what it’s about. Structuring a scene to coax out the drama. Structuring the story into acts. Turning a plot, revealing character. Setup, payoff, setup, surprise. A screenplay is a blueprint, focused on essentials. What happens, what’s said, what’s seen on the screen. They’re written staccato, more like poetry than prose. It really is an art form. Like kabuki.

Knowing structure is useful in novel writing. In fact, for thrillers it’s essential. But novels allow far more freedom for the writer. You can go anywhere your mind can go, consciousness has no bounds. You can enter a character’s head, reveal his hidden thoughts. You can lay out the big picture or focus on tiny details. The stray black eyelash on a woman’s pale cheek. The cool drop of sweat rolling down the hero’s neck. Smells. Sensations. Moods. Ideas. Absolutely everything is available.

And the great thing is, when you’re done with your novel, you have a finished product in your hand. Not just another script draft for everyone to piss on. 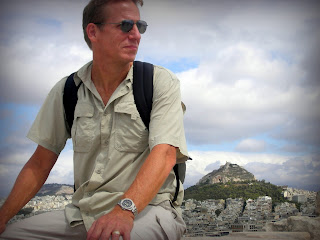 BD: Will there be more adventures of Jack Duran or do you have something else in mind for the next one?

DA: LOTUS ended the trilogy, so I’m taking a break from Jack for now. At the moment I’m working on a serial killer thriller—without the serial killer. Like all my books, it’s a love story. It’s set right here in West Hollywood.

DA: Nailing the sentence. When you get it just right, it’s a kick.

BD: Thanks for stopping by and best of luck with your books!
Posted by Brian Drake at 1:28 PM