Andrew Warren is a new kid on the block that y'all better look over your shoulder for. His series character, Thomas Caine, might seem like just another Jack Bauer, and maybe that's a good thing, but what Warren brings to the table is a pair of books set in the Far East, rendered in terrific detail. Almost as if he's been there. It's nice to see a protagonist working a different beat than Europe, New York, and Los Angeles. I was very impressed with Warren's first effort, Devil's Due, and signed up for his email list to get a free copy of his newest, Tokyo Black, which I reviewed on Amazon. I also contacted him for a chat.


Brian Drake: Tell us about Thomas Caine and how he came to be. Why did you choose the Far East as his stomping ground?

Andrew Warren: I think most authors have a hard time describing exactly where their ideas really come from.  I had tried starting a few novels in the past, but I lacked the motivation to complete them, or I just wasn’t secure enough in my writing.

Then, after years of unsuccessful starts and stops with writing, I guess I had a “get busy living or get busy dying” moment, to quote Shawshank Redemption.  I had some personal ups and downs, and I was working in a job I really didn’t enjoy.  I decided I would use my writing as an escape.

I was suddenly really driven and passionate about it, and I wanted to get started quickly.  I figured if I went with a mystery / thriller story, I could sort out some of the plot elements out as I went along.  Caine just popped into my head as the perfect protagonist for that kind of story.  Sort of an “anti-James Bond”, a shadowy figure who didn’t know exactly what he was getting himself into, or who he could trust.  Someone scarred and left bitter by betrayal and guilt.  I think I, like a lot of people, can relate to those feelings, although obviously on a much smaller scale than Caine!  I named him after Michael Caine, one of favorite actors.

I chose Japan as the setting because I had visited there in the past, and the place made a huge impression on me.  I absolutely loved it… the food, the culture, everything.  A good friend of mine thinks I must have been a samurai in a past life or something.  Tokyo is such an amazing city, and Kyoto is probably my favorite spot on the planet.  I figured that if I was going to give myself a fighting chance of finishing a novel, I had better set it somewhere I loved writing about.  Japan was that place for me.  Once I made that decision, the other Far East locations, like Thailand, just kind of fell into place.

BD: How did you start writing?

AW: As a child, I was a huge comic book fan. What I really wanted to be was a comic book artist.  But the fact was, I couldn’t draw.  So I started writing little stories about superheroes, secret agents, talking animals… All the stuff I loved.  I didn’t really think of it as “fiction writing” at that age.  I was just describing the things I wished I could draw.

As I got older, I discovered the short stories of Robert E. Howard and H.P. Lovecraft.  A light switch flipped in my brain.  I knew I didn’t have the patience to finish a novel at that age.  But a short story seemed manageable.  I began writing these stories about a red-haired barbarian called “Hiatus” (I have no idea why I chose that word for his name.)  I would turn them in as free-writing assignments in my high school English class.  Eventually, my teacher started asking about them.  “Hey, when do I get the next Hiatus story?”

From that point on, I never really stopped writing.  I studied film at the University of Miami, and immediately gravitated towards screenwriting.  But I also double-majored in English, and kept writing short stories and things on the side.

AW: Well, one obvious influence is travel.  My trip to Japan was a huge source of inspiration for me.  There are some locations and characters that I pulled directly from my experiences there.  In Tokyo Black, Caine interacts with some yakuza gangsters that use a koi farm as their base of operations.  I wandered into that location one night, just walking around the city.  It was exactly as I described it in the book, right down to the old man singing to the koi.  I didn’t really see any yakuza there, but just the image of those plastic kiddie pools filled with beautiful fish stuck with me over the years.

Another source of inspiration that might sound a bit strange is playing video games.  I’m just a casual gamer, but I do enjoy them.  Games these days are incredible… they can provide full-blown narrative experiences, filled with immersive action, drama, and excitement (plus a lot of frustration if you’re as bad at them as I sometimes am!)  Every now and then, I’ll be playing an action-packed game, and it just hits me.  “Hey, Caine could use a move like this!” or “I could use a location like this in a Caine story!” The scene in Devil’s Due, where Caine crawls under the jungle cabin, was inspired by playing one of the Far Cry games.

BD: Writing for the Kindle and e-reader audience can be pretty daunting. How do you keep up on the demands of both writing and promotion and chasing the constant carrot that is ebook success? What has worked for you so far?

AW: I’m only two books in, so I’m still a newbie at this!  But I will say the number one thing that held me back from doing this sooner was lack of confidence.  And in retrospect, it was pretty silly of me.  I was writing first drafts, they’re not supposed to be perfect!  I knew that intellectually, but somehow I would still read my rough drafts and think, “This isn’t good enough.”  What I should have said was “OK, here’s something rough.  Now, how do I make it better?”

I also think it’s important not to get too hung up on any one step.  There are a lot of moving parts in self-publishing.  I try to keep it simple.  Write, edit, publish, promote.  Then, do it again.  If it doesn’t go perfectly… welcome to the human race!  Nothing is ever perfect.  I’ll improve on the next one. Then something else will go wrong, and I’ll fix it on the next one, etc.

I think it’s incredibly important not to fall into “Lottery thinking.”  That’s the classic dream that one book, or one screenplay, will hit it big.  You’ll be a huge star, make millions of dollars, and retire to a beach somewhere.  Hey, it could happen, but I think being able to make a living writing – that’s the real reward.  You have to work towards that, and whatever else comes is a nice extra.

I try to remind myself of the line from Creed, when Rocky trains his young protégé.  “One step, one round, one punch, one fight.”  Right now, I’ve just published my second book.  A few years ago, that was inconceivable to me.  People have bought it, and they’ve actually read it.  And based on the reviews, they really like it!  That’s my dream, right there! We’ll just have to see what comes next.
BD: What drew you to espionage? If you weren't writing espionage, which subject matter do you think you'd tackle?

AW: Growing up, my hero was James Bond.  Arnold and Stallone were the big action stars then, but I was just a little scrawny kid.  I knew I could never be a huge, muscle bound avenger like those guys.  But Bond got by on his wits, charm, and an arsenal of super-spy gadgets.  That was something I could aspire to!

Then, as I got older, I discovered other great action characters, like Mark Hardin, Jason Bourne, and John Rain… I think there’s something about the lone hero with a gun, up against a dark, corrupt world, that really appeals to me.  When you strip away all the action and politics, spy thrillers are very personal stories… At least, the ones I like are.  How far will you go, where do you draw the line, how do navigate the grey space between black and white?  What is honor in today’s world?  It’s almost a modern evolution of film noir, and the classic private eye stories of Chandler, Hammet, and others.

Before Caine, most of my writing was in the horror genre.  Recently, I was one of the lead writers for the YouTube Red series Fight of the Living Dead.  It premieres in August, and features a bunch of YouTube stars trapped in a simulated zombie apocalypse.   It’s really wild… a hybrid of narrative and reality TV.
BD: What's next for you and Thomas Caine?

AW: Well, Tokyo Black just launched… so I’m hoping it will sell millions and I can go retire on a beach somewhere.  Ha!  Just kidding.

I’m about a third of the way through the next Caine thriller. This one is set in China, another place I really loved visiting.  Now that promotions are just about over for Tokyo Black, I’m looking forward to getting back to writing.  I also have the first couple chapters of another Caine novella started.  I really enjoyed working on Devil’s Due, and I’d love to space out the novels with some shorter works featuring Caine and his friends. 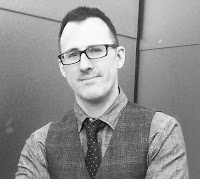 I also have some ideas brewing for a kind of noir-ish take on a space opera series.  That’s pretty far down the road through.  I want to get through at least two more Caine books first.

Thank you for having me on your site Brian, I really appreciate it!  It was fun taking a look back at the creation of Caine.

Please check out Devil’s Due, and Tokyo Black, out now on Amazon!  If you want to know more about my books and what I’m working on, you can visit my website at www.andrewwarrenbooks.com.  Or look for me on Facebook, @andrewwarrenbooks

I’d also like to add that the self-publishing community is incredibly supportive and helpful, and I’d like to do my part.  If anyone has any questions about writing or self-publishing, please don’t hesitate to drop me a line through my website.  I’ll do my best to answer!
Posted by Brian Drake at 1:51 AM