After a long delay I have finally released The Petrova Betrayal, aka Stiletto #4.

My fiance and I have been planning our wedding, so it's been hectic. Two more months and I kiss my bachelor days good-bye, and having been a bachelor for so long, I'm quite looking forward to the change. 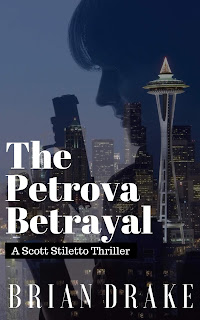 For the two of you who have been waiting for Stiletto #4 (hahaha) you can buy it now.

Scott Stiletto is out of the CIA, but not out of action. Working as a freelancer, Stiletto is hired by Kim Jordan, CEO of Jordan Defense, a firm involved in creating a new radar system to detect stealth aircraft. It’s a development that may re-shape U.S. defenses, and somebody is trying to steal the plans. Stiletto dives in to stop the theft and keep the data from falling into the wrong hands, while attraction burns between him and Kim Jordan, causing Stiletto to take a much greater interest in the mission. An interest that may prove fatal.

Soon competing enemies reveal themselves, old enemies become allies, adversaries thought dead reappear, and Stiletto’s quest to secure the radar plans takes him around the world in an action-packed thrill ride where nothing is as it seems.
Posted by Brian Drake at 6:13 PM