Black Pudding by David Goodis; or, “Go on, Oscar, give him the knife.” 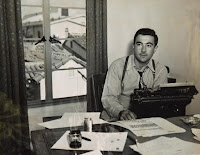 That’s the first word that comes to mind after reading “Black Pudding”, a short story by David Goodis, a writer who should need no introduction in this forum. Wow, what a sucker punch of a story, and a simple story, too. But in the simplicity is a level of understanding about the human condition that cannot be ignored.

Ken Rockland is back in Philly after doing nine years in San Quentin. His gang put him there. During a job his boss, Riker, conked him over the head, leaving him for dead, because Riker wanted Ken’s wife. He got her, too. Ken did his time and never named names and when they let him out he went back home to Philly so he could start over. But it isn’t much of a re-start. He’s on the fringes of Skid Row and when we meet him he’s staring at the front window of a restaurant that offers egg-foo-yung at eighty cents an order but he only has thirty-one cents in his pocket.

Such is life for Ken. Soon it gets worse. The old gang heard he was out and they’ve come to Philly to kill him before he can find them and kill them. Two of the hoods corner him at the restaurant. But Ken isn’t interested in killing anybody and he runs away only to hide in the blacked-out cellar of a condemned building. He’s not alone in the cellar. Another down-and-outer named Tilly is already there, and they forge a connection. She’s hiding from the world and taking solace in opium; there’s a scar on her face from forehead to upper lip because her now-dead husband once tossed her out the third floor window. After Ken tells his story, she tells him he needs to finish them off. Get even. “Revenge is like black pudding.” But he wants to put the past behind him.

The scene between Ken and Tilly in that blacked-out cellar is amazing. The dialogue is fairly pedestrian, but the mood, man, the mood is amazing. They sit in near total darkness with only a candle for illumination, and the image you get in your head is something Hollywood will never duplicate. Wow, man, just wow. This guy is good.

Then a realization hits Ken that turns Black Pudding from a typical crime story into literature. Goodis writes:

There’s only two kinds of people in this world, the ones who get kicked around and the ones who do the kicking.

What is so powerful about that statement is the truth behind it. At first your mind recoils from it; you don’t want to admit it’s true, but it is, and before you can identify which one you are the story starts moving so fast you can’t keep up.

A gear has changed in Ken’s mind. We’re not really told what it is, but we’re lead to believe it’s the sight of Tilly smoking her opium and living in her pity-party world. She could get her face fixed, but she doesn’t want to. Her scar keeps men away and that’s fine for her but Ken sees somebody beautiful and thinks it’s a tragedy she keeps herself locked away. Maybe he thinks it too bad, too, that he’s taken the easy way out, but the realization that he’s doing so makes him want to move from someone who’s been kicked to someone who won’t be kicked anymore.

The action that follows is also fairly pedestrian but wow, man, just wow. What a blow to the head. When Ken gets even he really gets even and when he walks away you know things are going to be better for him and Tilly.

And after you have closed the book, you can wonder if you’re the kind that gets kicked or does the kicking.

What you decide after that is your own business.

Black Pudding by David Goodis is featured in Hard-Boiled: An Anthology of American Crime Fiction edited by Bill Pronzini and Jack Adrian.