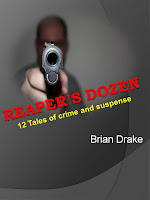 Well, I'm going to put out some work for the Kindle market but I'm not using any of the manuscripts I currently have in circulation. I've collected my best short stories (seven of which have already been published) and that will be what Kindle readers will get. I'm calling the effort "Reaper's Dozen--12 Tales of Crime and Suspense". If this works I'll write some original stuff as a follow-up, and have several outlines in progress. My goal is to build an audience so I can go to publishers and say, "I have a following that will pay money for my work." Not only am I making this effort, but I am also in negotiations with an east coast newspaper to write a column, which will offer further exposure. We'll see how that goes. In the meantime, I thought you all would like to see the cover. It's the first version, with changes to come, but I'm so excited by it I couldn't resist showing off.
Special thanks and acknowledgement to my friend a fellow writer Rebecca Forster for the grunt work, and my brother-in-law Robert for taking the scary picture of me and my gun. Yum.
Posted by Brian Drake at 8:52 PM