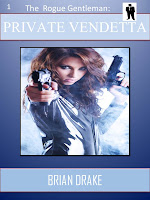 Here is a sneak peak at the covers of my new series, The Rogue Gentleman. The series will debut with a "pilot" novel, a full-length adventure, followed by a numbered continuity of novellas that will be stand-alone stories with a common subplot running through each. The novellas will appear once a month and I am currently writing up a storm to meet the schedule. 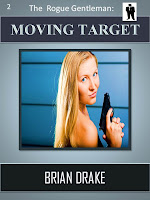 Who is the Rogue? Throw The Saint and James Bond into a martini shaker, shake until ice cold, and add an American accent and you have it. You won't find any of the bleakness contained in my crime novels; instead, there will be high adventure mixed with humor, lots of guns and things getting blowed up real good, and a few fabulous babes thrown in for flavor.

The Rogue himself is in reality Steve Dane, former US agent and mercenary who now rights wrongs wherever he finds them. Assisting him is sexy former FSB operative Nina Talikova. I've given them a Nick-and-Nora vibe so along with the gun fights there is a lot of alcohol consumption. A lot. Nina loves her vodka... and her nine-millimeter SIG-Sauer... and Steve Dane... but not always in that order. There was the temptation to have Dane mix with a different woman in every story, but I decided I liked the idea of a one-woman man much better. A case of herpes Dane does not need.

Anyway the Rogue is on the way. I hope you enjoy the stories.
Posted by Brian Drake at 1:59 PM