Ian Fleming's The Spy Who Loved Me, Or: When Ian Almost Killed Off 007

The Spy Who Loved Me is a good James Bond book. I know he thought that it was terrible and felt that the experiment in writing about Bond from a woman's point of view failed miserably but that simply isn't the case (he hated it so much, he asked that it not be reprinted--ever). You can make the case that Fleming stank at writing from a female point of view, because I don't think Vivienne Michal sounds much like a real woman at all, but that's a minor point and we must admit that most male writer do not write female characters very well. Female writers, on the flip side, also do not write male characters very well. It's a Mars / Venus thing. You can't write about what you don't understand.

The story of how Vivienne Michal, the heroine we spend time with throughout the story, encounters James Bond doesn't give us much insight to Bond as a character, but it's a fun ride, and I think we've had all the insight required from the other books. There isn't much more to reveal about him at that point in the series. 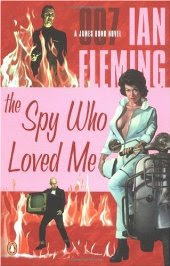 While working alone at a roadside motel, Michal is harassed by the mafia thugs who arrive to carry out a scheme for their boss, who owns the motel, and Michal will be the unfortunate victim of that scheme. Fleming's dialogue for his bad guys sounds like he copied it from a bad 1930s Bogart movie; however, the two thugs themselves are very well drawn and one of them even has metal teeth which must have inspired the Jaws character who appeared in the film version. The hostage situation he describes is also nail-biting. When James Bond, after getting a flat tire, shows up at the motel, we let out the breath we've been holding because the brave knight has arrived to rescue the damsel in distress. Bond is quickly recruited to save Vivienne (not that it takes much!) and he does so in typical fashion.

I think it was with this book that Fleming toyed with killing off 007, having tired of the character and the hassles of dreaming up new adventures. It would have been the perfect vehicle. Instead of a third person report on the death of Bond (like he tried, almost, in From Russia, With Love), we have an eye witness report. The tell-tale sign occurs just before the final battle. Fleming practically foreshadows Bond's death when he tells her to "remember who I was". He gives her his 007 recognition number and runs off to fight. She wonders why he would use the past tense, and in the suspenseful fight that follows we hold our breath as Bond and the baddies shoot it out. 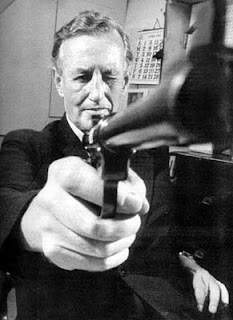 Of course, Fleming did not kill off 007 and he followed up this novel with the terrific On Her Majesty's Secret Service.

My only complaint about the story is how many times Bond apologies to Michal for this, that, and the other, usually after he fails to accomplish a goal, or a trick fails, or for some other reason, and while he may be trying to reassure her that he can finish the job, it made him seem weak.

Other than that, if you've avoided The Spy Who Loved Me because of its reputation as one of the lesser Bond books, give it a read. I dare you to put it down--you won't be able to. I think you'll find it earns its place in the Bond Canon quite nicely.
Posted by Brian Drake at 5:05 PM