Eventually I always keep my promises. You may remember me saying in an earlier post that I would like to go through the James Bond books written by John Gardner once again. I read them all as they came out in the '80s and '90s but never held onto them. Now that we have access to wonderful reprints, I have started going through the books and I am very pleased indeed. 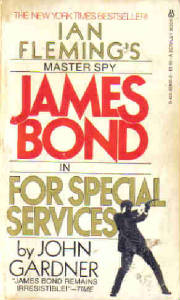 I've already mentioned License Renewed; now I'm reading Gardner's second Bond, For Special Services. This is the book which reintroduces SPECTRE as the villain of choice, with a new Blofeld taking the reins of the organization. It's a great set-up, and Gardner makes the connection to the Fleming novels by giving us a terrific background update which really makes the series feel like a whole story. I liked that bit of detail. Gardner was truly a student of Ian Fleming and it shows.

The scope of the story is also good, taking us from one location to another. Gardner had to write longer stories than Fleming, so we probably get a little padding and extra details that Fleming left out, but they are value-added details and one shouldn't quibble about them. What I like about the extra stuff is that it shows Bond as part of a larger organization. Fleming always sent Bond off alone and we never got the feeling that MI6 was the big organization that it is; Gardner changed that. His Bond feels more like a genuine working man who takes on extraordinary assignments.

Bond is teamed with Felix Leiter's daughter, Cedar, a decent bit of plotting, but one I would have avoided. Bond treats her like his own daughter so we get no raunchiness here. Cedar, of course, falls for Bond. Other than giving the book another link to the past, I'm not sure she does anything a different character could provide. It's neat to see Bond able to control his urges, though.

Without going too much into the story, I will say that Gardner provides a terrific outing for OO7, with a twist that thrilled me back in the day and one I'm sure will still deliver, even though I know the Big Reveal going in. 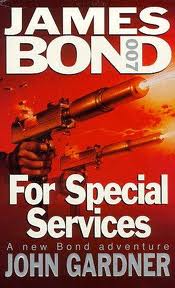 Gardner's writing is very business-like. Just the facts. He doesn't engage in a lot of hoopdedoodle. He puts you in the action. If he had quit after For Special Services or even after the third book, Icebreaker, his place in Bond history would be secure. I didn't care for where he took Bond in the later books. Before his tenure was done, Bond seemed tired, going through the motions, and maybe he had too many girlfriends get killed. We'll see if my opinion changes as I read the rest of the series.

Of course, I have to nit-pick Gardner's choice of weapons for OO7. Was the Walther PPK really so bad? In this book Bond is issued a Heckler & Koch VP70, certainly an interesting piece in the history of firearms, but not very cool. In Icebreaker Bond gets a deserving gun, the HK P7, and Gardner finally issued him a permanent piece in Role of Honor, but I wish he'd have stayed with the PPK. Or, at least, given Bond the P7 from the start, or, better, a Walther P5. Once again he isn't around to answer those questions. But he wrote some good books and we can be glad for that.
Posted by Brian Drake at 7:45 PM