I first read The Great Gatsby in high school, of course, and because it was forced on me I did not pay great attention to it. Only later in life when I started studying Hemingway did Fitzgerald's name come up again, and I decided to read the book all the way through. It was the only Fitzgerald novel I was familiar with, so I figured it was a safe bet. Low and behold the story, the characters, the cynicism and the sense of hopelessness that lives in the book swept me away. I wasn't reading about America in the '20s. I wasn't reading about the excess of the Jazz Age. I was reading about my time, my friends, and me. I'm Gatsby. I'm also Nick Carroway. Reading Gatsby is like looking into a mirror, or, as Hammett described in the Flitcraft parable, lifting the lid off of life and getting a look at the works.

It's hard not to identify with Nick Carroway, struggling to find a place in the world only to discover your plug may be in the wrong socket, and what do you do when you learn that? We like to say today that if you don't like something, change it. But bumper sticker slogans don't take genuine human behavior into account. It's hard to change once you've started on a path, invested years of effort, and thought you had made the right choice. It's hard to let go of a dream. It's tougher to find a new one, because they don't appear out of thin air. What about  the connections you've made? It's hard to walk out on people when you're not sure you'll find others to fill the space.

And then there's Jay Gatsby himself. There's a guy who couldn't find a new dream, who stayed attached to the old one, and spent his life trying to recapture something that was never his to begin with. His tragic ending robbed us of seeing his story through to the very end, a happy ending, perhaps. Instead of cynicism of the age--coming to terms with the shock of WWI, dealing with the excess that only caused more emptiness, the "what do we do with this thing called life"--fulfilled its role in the process, showing that what's left in the past truly belongs there and we have no chance of recapturing it. If you could see how that very story line is playing out in my life right now, in real time, the impact of that observation would carry even more weight. In other words, I lost my Daisy too. Like Gatsby, I live near her (a wild coincidence I didn't notice at first), separated by a range of hills, which may very well stand for the invisible walls that separate us now. If I may borrow from Dokken, in my dreams she's still here, and it's the same as it used to be. I understand Gatsby.

I'm more than ready to declare Fitzgerlad better than Hemingway, not because of his tight writing and minimalist style, one actually tighter than Hemingway and more coherent and to the point, but because nothing Ernest has written has had the impact of Gatsby. No other literary work has lived so long in my head after reading.

I will say the same of the 2013 film starring Leonardo DeCaprio as Gatsby. While the film is too busy and too colorful from the visual standpoint, the film captured
the heart of the story perfectly and I will say it is the best interpretation of the film ever done. I hated it during the first few minutes when they jettisoned the greatest opening lines of a story ever written, and instead substituted something with less impact, but they used, verbatim, the last monologue of the book to great effect. It was mesmerizing. 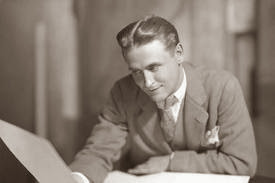 Fitzgerald and I were actually born in the same city, albeit many years apart, so in a way I feel a connection to him. We both did some drinking to cover up problems only to find they never went away but were, in fact, intensified, because you can't escape your subconscious. And while he said that there are no second acts in America, I can't help but argue with that. Dreams may not be easy to find, but they're out there, like a carrot on a stick, and if you run fast enough maybe you stand a chance of grabbing one.
Posted by Brian Drake at 1:22 PM