The Sushi Bar at the Edge of Forever

Did you hear the one about the haunted toilet?

The Sushi Bar at the Edge of Forever by Calvin McMillin is a collection of short stories that will not only satisfy your need for a good scare but also provide genuinely good entertainment.

Calvin comes to writing with a very diverse background and a talent for crisp, economical writing that should delight those of us who are always looking for that one true sentence.

And he wrote a story about a haunted bathroom. Stephen King has never thought of that!

Brian Drake: Tell us a bit about your background, Calvin.

Calvin McMillin: I was born in Singapore and spent my formative years in a little town called Rush Springs, Oklahoma. After graduating high school, I went on to Oklahoma State University, where I received bachelors’ degrees in English and Secondary Education. I taught in the public school system for a bit and then left the mainland behind to get my master’s degree in English from the University of Hawai‘i at Mānoa. After I completed my master's degree, I attended the University of California, Santa Cruz, where I pursued—and eventually earned—a PhD in literature. So, it’s safe to say that I’ve spent a lot of time in school, either as a student or a teacher!

BD: How did your collection take shape?

CM: The first iteration of The Sushi Bar at the Edge of Forever emerged out of a creative writing course with Professor Albert Wendt at the University of Hawai‘i. It was actually the first creative writing class I’d ever taken, and I really relished the opportunity. Fiction writing was always something that I had to squeeze in during my downtime—after work when I was a teacher or between homework assignments when I was an undergraduate—so, to have writing actually be the homework assignment was a wonderful change of pace.

If I’m remembering correctly, the final assignment called for a portfolio of the student's best work, and somewhere along the way I had this idea of writing a collection where all the stories would all be connected in some way. Plot-wise, each of them would work as a standalone tale; however, when read together, they would form a subtly interlinked experience for the reader. Characters, settings, and themes would recur with a cumulative significance. “The Sushi Bar at the Edge of Forever” and “Model Behavior” were two of the first stories I wrote, and the rest sort of fell into place after that.

BD: How did your professor and fellow students react to your subject matter?

CM: I remember it being a supportive environment, and Professor Wendt was very encouraging.

In fact, when I picked up my final project, I was blown away when I saw that he had written such complimentary things about my writing. To receive that kind of feedback from an award-winning writer—well, it was nothing less than inspiring. Granted, he might have written the same thing on the projects of all my classmates, but let’s not destroy my illusions just yet!

BD: Your stories offer such a unique twist on the typical horror tale. How long did it take to develop your own direction, rather than following standard horror convention?

CM: I drew inspiration from the many ghost stories and urban legends I’d heard during my numerous visits to Singapore over the years. While supernatural tales—particularly films—from Japan, China, Korea, and Thailand have gained differing amounts of exposure in the West, Singaporean horror, which is based heavily on Chinese and Malay folklore, remains relatively unknown outside of Southeast Asia. I felt that this might make it more frightening—or at the very least, more interesting—to American readers who have perhaps grown tired of the same old thing. Whether that's true or not, the Singapore setting was more way interesting to me, along with crafting stories that focused primarily on Asian and Asian American characters.

BD: The Singapore setting was indeed outstanding and it was really neat to get a glimpse into that side of the world. Can we expect more stories from you also set in that area, touching on the background you mentioned (which sounds fascinating--I like reading about how other cultures' folklore and how it's different/similar to ours in the U.S.), or is this the only opus you see yourself doing?

CM: I don’t have anything planned at the moment, but I imagine that Singapore will always be a part of my work. For example, in the novel I’m currently writing, some of the characters hail from Singapore, and what happened to them there figures largely into the plot.

BD: Two of my favorite stories in the book are “The Ghost Writer” and “Model Behavior”. Can you tell us a little about them, and I’ll leave you to whether or not to spoil anything.

CM: The Ghost Writer was especially fun to write. The story focuses on Ridley Lang, a popular Singaporean writer who seemingly has it all—a bestselling book series, a nice salary, and the adoration of fans all across the country. As wonderful as all that may sound, there’s one problem: he’s totally anonymous. As part of a publicity gimmick, his publisher decided at the very beginning to cloak Ridley’s identity in secrecy. It’s an arrangement that Ridley was more than happy to accept at first, but after churning out book after book over the years, he suddenly decides he’s had enough. Not only does he want to go public, but he wants to write a “serious” novel. He's tired of being chained to this franchise. Unfortunately, Ridley takes some short cuts along the way that have dire consequences.

For this story, I was able to draw on a lot of things for inspiration. In Singapore, there actually is a long-running anthology of “true” horror stories that has been pretty successful since the late 1980s. It’s up to volume 24 the last time I checked.  Anyway, all of the stories in each volume are purported to be compiled by the same author. However, nobody has ever seen the guy in person. And when he makes public appearances, he’s dressed head-to-toe in black—and that includes a mask.

When I heard that he was rumored to be a white guy, I realized this could be a short story. The idea of being anonymous is bad enough for anyone who craves even just a little bit of fame, but the idea of ethnic impersonation really appealed to me. Funnily enough, long after I'd completed the story, in September of 2015, there was a controversy here in the U.S. when a white guy named Michael Derrick Hudson was revealed to have posed as a Chinese poet named Yi-Fen Chou—after his poem was chosen for inclusion inThe Best American Poetry anthology. And if you consider all the things going on lately regarding Asian and Asian American representation in the media—the Scarlett Johannson/Ghost in the Shell controversy, for example—I think my story has taken on an added currency. The Ghost Writer was also a way for me to explore the issue of plagiarism, something I have been a victim of on more than one occasion. If something can't be resolved in real life, there's always fiction! 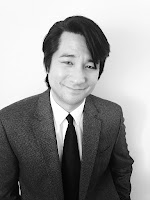 If I remember correctly, Model Behavior was the second one I wrote, immediately after completing the title story. It focuses on Ashley Wu, a Singaporean citizen who relocated to California as a child, but who’s just returned to her home country for the first time in a decade. Over the years, you hear all sorts of stories about celebrities who hadn’t previously thought of pursuing a career in acting or modeling, but suddenly find themselves discovered by a producer or an agent. I wanted to play with that idea in that story. So while Ashley is browsing Orchard Road, which is a big shopping district in Singapore, she bumps into a representative of a world-class modeling agency. She’s asked to come in for an audition, and that really sets her imagination afire. Maybe she could become a model. Maybe she could be an actress. Her head is swirling with possibilities. As the story progresses, however, she starts to question whether this seemingly chance encounter was truly a coincidence, destiny, or something else entirely.

The funny thing is that this story is based on a real-life incident. Aside from Ashley herself and some of the other fictive elements I added, the basic story up until she enters the modeling agency actually happened to me. I think I actually entertained this idea that I'd be an American who suddenly gets famous overseas. Like David Hasselhoff is to Germany or something. It’s all pretty embarrassing! In any event, I can’t actually say for sure that there was a supernatural reason for what occurred, but it certainly was an eerie experience. It's become my go-to story when it comes to campfire tales.

BD: All I can say is that no horror collection is complete without The Sushi Bar at the Edge of Forever on your shelf or e-reader. I cannot express enough about how much I enjoyed the stories; as I said, I’m not horror fan, but I could not stop reading Calvin’s work and I think you will enjoy it too.
Posted by Brian Drake at 4:59 PM