I first became aware of Ian Kharitonov through an interview he did with somebody or other talking about an action/adventure renaissance taking place in the independent author community. His reasoning impressed me, which of course it would, since I've been saying the same things privately to other writer pals as we churn out the kind of he-man action stories we grew up reading while wondering if readers cared. Looking at the samples of Ian's books on Amazon, I found a writer who is high and tight with the prose, wastes no words, and really hooks you from the get-go.

His latest, Kremlin Storm, is no exception. Get ready for a rocket-paced ride with a twist you might not be expecting. 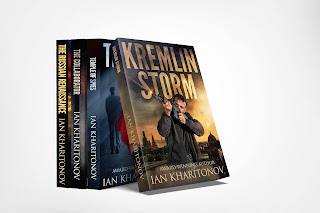 Brian Drake: You're writing a series with a subject matter (thrilling events taking place in Russia) that we don't see very much, with Martin Cruz Smith's Gorky Park probably being the most well known example. What made you decide to use Russia as the stage for your thrillers? (Aside from once living there, of course.)

Ian Kharitonov: Write what you know! The old adage still holds true. And in my case, I write what others don't really know much about, to be honest. A quarter of a century after the collapse of the Iron Curtain, Russia remains an enigma. Despite the growing interest in the country, many authors who want to jump on the Russia bandwagon often fall flat and get their basic facts wrong, even some of the big names. As a reader, I found it frustrating at times (and still do). So I decided to take the matter into my own hands. As an author, I turned it into an advantage, finding my niche. I've even coined the term Russploitation for the subgenre I'm writing in. There aren't many Russian protagonists in most thrillers that you see on the shelves. Only Red Sparrow has made a big splash recently. Arkady Renko is another notable exception, but Gorky Park and its sequels were police procedurals rather than action/adventure or espionage thrillers. And I believe that being Russian allows me to add an extra layer of authenticity that even Martin Cruz Smith couldn't achieve, giving my readers a real insider's look. I'm very flattered by the analogy, though, and my early sales pitch was "Jason Bourne meets Gorky Park," so if you want to sum up my thriller, it fits.

BD: Is Gene Sokolov based on anybody in particular? What about his rescue unit?

IK: I think that any protagonist is a reflection of the author's psyche in some way. It's the reason we write, to fulfill our hidden dreams and aspirations, or to banish our subconscious fears, to make anything possible on the page. I have two main protagonists in my series, the Sokolov brothers, Eugene and Constantine. Perhaps I've always wanted an older brother? I don't know! In any case, they're the only two surviving members of their family which has been ravaged by the last one hundred years of Russian history. I didn't want to create a cliché superhero who's equally skilled at brain surgery and powerlifting, and prone to quoting passages from Schopenhauer in the middle of a gunfight. So I wanted to strike a balance between my heroes. Constantine is a historian with basic self-defense training and Gene is an all-action man educated in civil defense. Constantine has been ousted from academia for his political views, while Gene continues working for a government agency. He's not a Russian Spetsnaz military type as seen in Hollywood, however. EMERCOM is roughly the real-life Russian counterpart of FEMA. Of course, I used some artistic license when fictionalizing it, making it more independent from the Kremlin's affairs. Sokolov is not a typical action thriller protagonist in the sense that he's supposed to be saving people instead of killing them, but he inevitably gets dragged into deadly missions that he has to fight his way through.

BD: Your bio says you turned down a diplomatic career to instead write fiction. What made you do that, and how did the experience that led to such an opportunity fuel your writing? 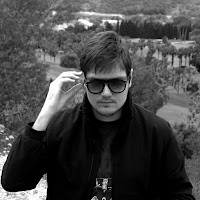 IK: Fresh out of college at twenty, I turned down a diplomatic career much in the same way as my main character turned down a military career. The nature of the Kremlin regime was quite clear and I didn't want to get involved. I was offered a job at the Russian Embassy in Sweden and I wouldn't touch it with a barge pole, especially in the wake of a recent spy scandal in Stockholm. Having lived in several different countries since a young age, I decided to move on to writing fiction, and Nordic Noir just wasn't my thing.

BD: You've released four books, two in 2013, one in 2015, and, of course, 2018. Most independent writers are grinding out titles every couple of months (sometimes one a month) to get traction, but it looks like you're approach is helping you sell books as well. What made you decide to do fewer releases, and what are your favorite marketing techniques?

IK: It's not a business strategy, it's procrastination! Seriously though, every writer wants to have written more and faster. I'm no exception. I do have an excuse of being a relatively young author finding my feet. My series required a ton of research, but now that I've laid the groundwork I hope to pick up speed and have quicker, shorter releases. I'm convinced that the ebook market is perfect for leaner novels like the men's adventure series from the 1970s. All plot, no padding.

As for the marketing techniques, the nascent digital landscape is still quite volatile and things change quickly. The tricks that work today might become useless tomorrow. My most reliable tool is probably targeted advertising. Some universal marketing principles do apply, and always will. Marketing begins before you even start creating your product, with identifying your readers' needs or tastes, or setting out to establish new ones. The market is difficult to predict, but the best thing you can do is write the sort of book you'd love to read yourself as a buyer.

BD: I'm a Cold War kid who used to think Russia was where "the enemy" was, and it didn't help that where I lived in California at the time was a Soviet "first strike target area". In recent years, mostly through research for stories, I've come to respect the people and culture. It's been disappointing to realize they've left one bad political system for another, under a regime that stays in power through dirty tricks and shenanigans, and continues to jail and malign (and maybe murder) those who oppose the system. Will Russia ever fully recover from the Soviet era, or will it take a lot of old men dying for new blood to finally make Russia great again?

IK: It was tragic, and my novels touch upon the subject. Unfortunately, the transition from dictatorship to freedom failed because it was still carried out by the same people. Communists who'd only learned about capitalism from Marxist textbooks could only build an evil caricature version of it.

As a result, Russia steered away from democracy toward a thugocracy. A Mafia state, like something out of a Mack Bolan book. La cosa di tutti cosi. As the popular saying goes: "Every country has its own mafia, but only in Russia does the mafia have its own country."

And there's no end in sight. On the contrary, Russia's become too small for these gangsters who want to spread their criminal influence around the world, from running internet troll farms to using WMDs in European countries. I'm sad to say that Russia has done everything to become the enemy once again. Are the Russian people complicit in allowing this regime to continue for at least another six years? The jury is still out. 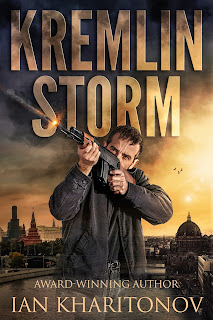 Will Russia ever recover from the Soviet era? The very same question is posed at the end of my first novel, The Russian Renaissance. My characters were somewhat optimistic about it, but that sentiment dwindled in the following books.

BD: What's next for your books? Will you continue the Sokolov series, or try something else?

IK: Now that Cold War 2.0 is officially here (http://observer.com/2018/03/theresa-may-announces-measures-against-russia-for-sergei-skripal-case/), it's nice to have a head start in the Russploitation game. I don't see the series going away any time soon. I have big plans in store for the Sokolov brothers. Hopefully, my plot ideas won't become reality, at least not until I finish writing the stories!

Brian Drake: You can learn more about Ian at his website or at his Amazon page. Thanks, Ian!
Posted by Brian Drake at 10:02 AM