The Wonderful Saint Templar, or: Can Anybody Spare a Halo? 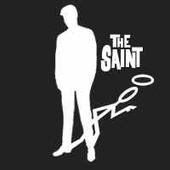 Just when you think you have read everything and will no longer find anything interesting (which is fine, you can read The Maltese Falcon once a year and never get bored), you find a gem. In this case, that gem is Leslie Charteris and his terrific creation, Simon Templar, aka The Saint.
It took me a while to get to The Saint. My first exposure to the character was the Vincent Price radio show, where Templar is an American in New York City experiencing various adventures and getting hit over the head....a lot. I didn't like the show, so I had no interest in reading the books.
Then Max Allan Collins writes a coffee table book called The History of Mystery, and The Saint gets a few lines, where Collins says he's more hard-boiled than he's given credit for. Light bulb time! I found a couple of Templar adventures at a used book store, went out on my deck with the accompanying cigar and Coca-Cola, and found a whole new world of adventure that I had no idea existed.
With The Saint you get mystery, comedy, adventure; thrills, chills, cliff-hanger escapes. Great characters who are full of life and humor and great dialogue. Charteris knew how to use the English language better than anybody--he dedicated a book to P.G. Wodehouse, saying P.G. could have written The Saint better than him, and now I think I'll have to track me down some P.G. Wodehouse. The drawback to how Charteris made English talk is that you get lost in some really big words--who cares, a dictionary isn't hard to find and he carries you along so well that you let it go because if you stop to look up a word you won't see how The Saint gets out of trouble.
So far I've read The Saint's Getaway--a laugh-out-loud adventure with a great twist at the end. Right now I'm reading The Saint in New York--and Collins was right! Simon Templar is more hard-boiled than he's given credit for. There's less humor in "New York" so far, but a ton of slam-bang action and hold-your-breath moments, and I can't put it down.
Up next is a paperback collecting two Templar short stories, and I can't wait to get into that one. I bet Charteris is really good in short form.
If you haven't read Simon Templar, give him a try.
Posted by Brian Drake at 8:27 PM