28 Minutes Into The Future with Mr. Chrome Oxide

Normally I feature thriller writers on this blog, simply because that's what I read, and the market I study, so when I find somebody I like, I want to put them in the interrogation seat.

Today, I'm interviewing sci-fi writer Chrome Oxide, who has a book out called 28 Minutes into the Future. What we have here is a mix of sci-fi and hilarious, and often thought-provoking, political satire. I'm talking laugh-out-loud stuff, the kind of laugh-out-loud reactions one might have to Wodehouse. That's about the highest priase I can think of.

Mr. Oxide not only sat in the interrogation chair for the usual "writer questions", but also has a different interpretation to The Answer posed by Mr. Douglas Adams that I think you'll find enlightening.

I'm providing copious links to Chrome's book, because if you search "Chrome Oxide" on Amazon, the first results are cleaning chemicals and power tool components.

Which is quite funny.

Chrome Oxide: Back in 2009 I started writing a daily blog satirizing the news. In June 2010 I read a genre novel that really bothered me. So I stopped my daily political satires and started writing genre fiction. In 2012 I became a published finalist in the Writers of the Future volume 29. That convinced me I had a future writing genre fiction and have been writing continuously since then.

BD: Your satire is well done, and provided some very good laughs, but I can't help but find some of it also incredibly depressing, because I can see your scenarios coming true. What has shaped the vision of the future you write about? How do you see the world going in the very direction you describe?

CO: I grew up reading genre fiction, much of which extrapolates current trends into the future. My brother recently turned me on to Austrian Economics, which I've found does an excellent job of explaining how important private property and freedom is. When you factor in that I'm also a born again pessimist, I find I have difficult viewing any kind of positive outcome when the mainstream media is so dead set on supporting corrupt politicians and corrupt political ideas.

While I want to believe in a white swan event, something that will save humanity from itself, that can't be predicted so I think the leftist march into socialism will crush the last bastion of freedom on the planet.

BD: Is sci-fi the best place for political satire?

CO: Science fiction and fantasy are perfect places for satire. They are the branches of literature where the writer is not limited to what is happening today, but what can happen tomorrow. There is a lot of humor in the exaggeration of current trends and events. For example: In New Mexico recently a male Muslim (the religion of peace as the news media constantly tell us) was recently arrested for teaching children how to be school shooters. The judge released the teacher because she didn't think the teacher was a threat to the community (or maybe she didn't want to separate the teacher from his children). I look at that and immediately think that 28 Minutes Into The Future those trends mean there will be Muslims teaching our children how to be suicide bombers and that anyone complaining about that is blowing it out of proportion.

BD: Tell us about some if the trials and tribulations you've faced when showing your work to others.

CO: One major problem is finding critiquers who are NOT offended by my stories. On more than one occasion, members of my critique groups have told me they were triggered and couldn't finish reading the story, or asked me me who I think will want to read what I write or asked me to
write funny stories that don't include politics.

That is just the start of my problems. After I finish a story, I've had no place to sent it.

While it never occurred to me that what I am writing is subversive, I have had to accept that some (many?) of the publishers agree with the critiquers I'm dealing with.

In addition, I'm a white male. I'm seeing a lot of calls for stories from non-white, non-male and differently abled writers. Because stories can be emailed in, I'm occasionally tempted to submit my stories and claim I self-identify as a crippled black lesbian female.

BD: One of these days I'll submit to one of those markets as a black Chinese Puerto Rican Jew. Should be a shoo in. Why is the sci-fi community so screwed up? Myself and some other writer pals would love to do something in that genre (space opera, for me), but not if we have to deal with PC idiots who want to know why the USS Enterprise doesn't have handicap access.

CO: I think the problems we are seeing in the sci-fi community are a reflection of what we are seeing in the culture as a whole. Because leftist mainstream media constantly propagandizes us with their
anti-science anti-moral stance (everyone that disagrees with the left is evil, fight words with violence, gender is not biologically based, ...), the sanity challenged feel more comfortable attacking anyone who doesn't favor their disjointed view of reality. 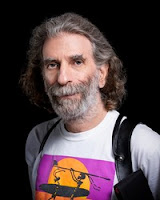 BD: Who influenced your writing the most?

CO: Robert Sheckley has been the greatest influence on my writing. His humorous short stories mocking government incompetence have been bubbling around in my subconscious for a long time. So when I decided to try my hand at writing genre fiction after my straight political satires, I knew what I needed to write. While this collection is some of my satires (there are more where they came from) I also enjoy non-political humor. Some of the authors I enjoy include Robert Asprin's Myth series, Piers Anthony, Terry Pratchett and others that I'll remember after this interview ends.

BD: Any novels coming in the future? Will your style of writing and humor lend itself to long-form work?

CO: I'm working on the third draft of a non-political high fantasy novel. My elevator pitch is "Cheech and Chong" meet "The Lord of The Rings." When I finish my third draft I will turn it over to my editor, Elaine Ash, who also edited all the stories in "28 Minutes Into The Future." 90% of the
chapters in the book end in cliffhangers. While writing the book, I couldn't write a new chapter until I came up with one or more jokes to feature. Since I finished that novel, it means there are one or more major jokes in each chapter. So I expect there will be more novels in my future.

BD: Elaine Ash is a marvelous editor, and I've used her myself many times. Pardon the commercial, but if you want an editor with attention to detail, and who can help you fix a novel's weak spots, she's the one you need to talk to.

CO: In my notes file, are story ideas and a cast of continuing characters in a non-political urban fantasy setting. Again, humor will play an important part.

While I do get pushback from leftist/liberals about my political satires, I have had a few conservative/libertarians ask me what happens next to some of the characters featured in my short stories. So if I can come up with enough jokes to fill a novel, I will be doing that as well.

I need to briefly talk about my style of writing, which I call the Frankenstein Method. Everything I write starts with a joke. Once I think I have enough jokes that feel appropriate, then I start assembling them along with other bits and pieces of connective tissue trying to connect the jokes.

For example, "Vampire Free Zone" was inspired by leftists demanding "gun free zones'. Since "gun free zones" attract armed shooters, I decided that a "vampire free zone" sign at a blood bank would attract a vampire. Then it was a question of coming up with vampire jokes as well as a story to place them in.

BD: One last question, and one I hope you'll be able to handle because it's a tough one. Here we go: Is The Answer really 42? Please remember not to reference The Question with The Answer because, if you do, the universe will collapse on itself.

BD: I knew I could count on you!

Check out 28 Minutes Into The Future today!
Posted by Brian Drake at 9:37 AM