I haven't done a book review in a long time, so why not get back to reviews with a book that really entertained me.

PHOENIX FORCE #13: HARVEST HELL is a book I found at a thrift store, and it had William Fieldhouse's name on the copyright page as the credited writer, despite "Gar Wilson" on the cover. Terrific! Sold! Fieldhouse was my favorite Phoenix Force writer. He wrote most of the series, a gargantuan feat considering the rest of his output at the same time; and Harvest Hell proves why Gold Eagle gave him most of the Phoenix assignments. The man simply wrote a team action story better than anybody.

Katz and the gang are in Greece this time, raiding an island where a dude is housing a bunch of terrorists in a conspiracy with Moscow to distribute a deadly virus that starves people to death. It's beautifully pulpy and outrageous--all in a good way. You want realism? Drama? Fuhgeddaboutit! You want a battle for the fate of the free world where five men will stop at nothing to defeat the dastardly villain even though sometimes the cheese gets a little thick but you don't care because this is the best Gouda ever? This is your book! 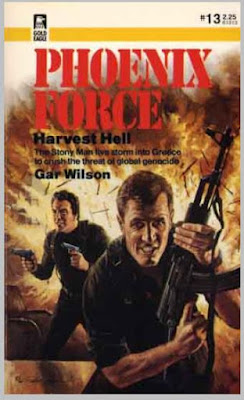 Of course the action scenes are terrific, so there's no reason to delve into one Fieldhouse's stand-out elements. What really zings in this later volume is that it reads like an introduction to the cast. Each member of the Force is introduced and highlighted with an action scene, background details, stuff somebody like me, coming back to the books after so many years, really needs in order to become reacquainted with these old friends. By the time the team got into their mission, they felt like real folks in real danger. It's the way a pulp story ought to be written. When you believe the characters, it doesn't matter how crazy the rest of the story becomes. You're fully invested, and nothing can break their hold on you.

As you might expect, I went back to that thrift store and raided their remaining Phoenix Force titles, most of them by Fieldhouse, but one of them, Down Under Thunder, written by Paul Glen Neuman, who wrote a great deal of PF titles himself, which I also had to buy, because it was the very first Phoenix title I read when I was 14 years old and sitting in Ms. McCoy's history class wishing it was my name on the cover.

It's going to be a lot of fun hanging out with Katz and the gang again.

Fieldhouse is an author I've love to interview, if any of you know how I might reach him, because I want to dig into how he worked and managed so many titles over a 20 year period. Just looking at what little of his bibliography is available on-line, it's hard to imagine he didn't pass out from exhaustion. It's all I can do to write four books a year; he, apparently, doubled and tripled that output without blinking an eye.

But if nothing else, he provided many hours and delightful reading in my youth, and he will do so again ... now that I'm significantly older, but still act like I'm 14.
Posted by Brian Drake at 6:49 PM