Guess Who Is Making a Comeback?

Probably not, it's been a long time. 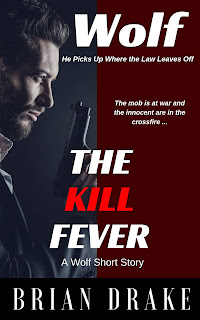 Once, when we were all young and beautiful, I wrote a set of short stories under a different name, featuring a hard-boiled vigilante/private eye named Wolf. The stories did well for me, but the pen name was a mistake. They'd have done a whole lot better for me if they were out under my own name.

Like before, the first story is The Kill Fever. It will be followed by The Dark, The Red Ruby Kill, and The Fixer. After that, Justified Sins, the first Wolf novel. After that, the second Wolf novel, and more short stories. I've big plans for Mr. Wolf.

Since I have a book from a real publisher coming out soon (The Skills to Kill, re: Steve Dane #1, which used to be The Rogue Gentleman), I'm putting out as much as I can on Kindle as a way of advertising.

The Wolf stories are the same as before, however, the upcoming novel, Justified Sins, has, again, finally (finally!) been restored to its original version, ie: before I took some bad advice and cut the entire subplot.

Thanks for looking. If you're read them before, tell your friends!